National Hockey League betting lines and odds are as old as the league itself, originating in Canada before being passed down to the United States during the early to mid-1900s. Today, the league features 31 NHL teams with the Vegas Golden Knights being the latest addition – a fitting one due to the league changing its stance on sports betting in 2018.

Our NHL betting guide was created to provide you with current legal hockey betting information and to offer our suggestions on where to find the most trusted online sportsbooks for betting on the NHL, so that you don’t end up in the penalty box when betting online this season.

Are Online NHL Sportsbooks Legal in the United States?

Domestic: When it comes to betting at NHL sportsbooks located within the U.S., the number of legal betting options become slim since only a handful of states have legalized sports betting since the repeal of PASPA and even many of those do not allow online bets on the NHL or any sport. 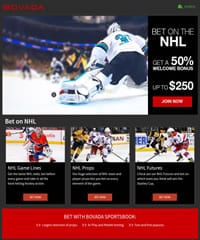 If you like betting on NHL Hockey games then you should see Bovada's NHL betting lines. Bovada offers betting lines and multiple betting types for practically every NHL game. In addition, you can also bet on period lines, team totals, and futures.

Bovada has been servicing the USA for almost a decade now offering Americans a trusted source for NHL betting. Below are some of the many reasons our team of industry professionals chooses Bovada over the other guys.

The NHL has 31 professional hockey teams that play in the Eastern and Western Conference.

These two conferences are each split into two divisions:

Every NHL team plays an 82-game regular-season schedule and 16 teams, 8 from both Eastern and Western, who score the most points during the regular season will make the playoffs.

Points are awarded each game and are based on the outcome of the game:

For the Stanley Cup Playoffs, 16 teams are seeded into a double-sided bracket where points determine seeding, and the highest seed (No.1) plays the lowest seed (No.8) from each conference.

Each team plays a best-of-seven series, and the team that wins four games advances to the next round.

When betting on the NHL, it’s important to keep in mind when certain wagers will payout or when value can be found due to a lot of action coming in on a marquee event. Here are all the key dates to keep in mind for the 2019-20 NHL Season:

The two most common bets placed on NHL games is the puck line and the money line. Both lines work similarly to other sports with some minor exceptions.

The puck line is the hockey version of a point spread given by sportsbooks on other sports, which is used to handicap the game to create a balanced number of bets placed on both sides with a roughly equal payout.

However, there are some major differences to keep in mind.

The NHL puck line is frequently set by an online sportsbook at -/+1.5 where the favorite (-) must win by 2 goals to win the bet, and the underdog (+) can win the game or lose by no more than 1 goal.

This is where betting on the NHL can turn out badly if you don’t know what you’re looking at because, in the example, Carolina is the perceived favorite to win the game but not by more than 1 goal over Chicago.

Since that’s the case, Chicago is actually the favorite for this puck line even though they are given the positive number for the underdog. The real favorite in a puck line is indicated by the odds in parenthesis and the amount required to bet (Chicago $180 to win $100, Carolina $100 to win $160)

Also, an NHL puck line typically never moves and if it does, it will always have a .5 to avoid a push. Instead, the odds will move instead to balance the action on either side

The NHL money line is straight-forward and exactly like that of other sports and may even be better than other points since the odds are typically super close.

A money line is a bet solely on which team will win the game with no handicap on goals scored. The -/+ odds will indicate which hockey team is favored and the difference will determine just how likely they are to win the game.

Taking the same betting line from Bovada that featured the puck line, we can see Carolina is favored as indicated by the (-) and a $175 bet would win $100 while a $100 bet on Chicago would win $155.

The most important takeaway is to know that the puck line and money line will essentially pick the opposite teams, which is different from other sports where they’ll be aligned with the point spread and money line showing a clear favorite and underdog.

Bets on the NHL are a bit different since games tend to be low scoring and close, but because the margin between the two teams is much smaller, then it means value can easily be found when a team is an outlier on your projected model.