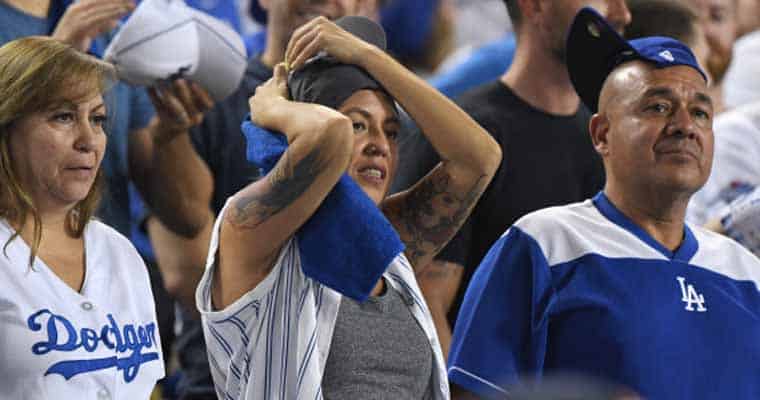 The Dodgers would need to hire someone to write a Hollywood ending if they lose tonight.

After losing the first two games of the 2018 World Series to the Red Sox in Boston, the Los Angeles Dodgers come home for at least two games and possibly a third game should they win Game 3 tonight or Game 4 on Saturday.

However, winning Game 3 tonight is of most importance to the Dodgers in order to avoid falling down a hole no team has ever climbed out of in the Fall Classic.

In the 114-year history of the World Series, no baseball team has ever come back to win the series after losing the first three games.

A total of 24 teams have faced an 0-3 deficit in the best-of-seven series to decide who takes home the Commissioner’s Trophy, and all have failed to make a comeback.

In fact, of those 24 teams, only three teams have managed to even win a single game, while the rest were swept 4-0.

There is a glimmer of hope should the Dodgers lose tonight if the American and National League Championship Series best-of-seven series are included.

When including the 11 League Championship Series teams that have gone down 0-3 in a best-of-seven, bringing the total to 35 teams, only one has ever won four games straight after losing the first three games.

And oddly enough, it’s the team they’re facing in the Fall Classic.

In 2004, the Boston Red Sox became the first team and only team to date in MLB postseason history pull off a reverse sweep, winning the ALCS 4-3 against the archrival New York Yankees after losing the first three games.

The 4-3 series comeback win earned the Red Sox a trip to the Fall Classic where they ended the “Curse of the Bambino” and captured the franchise’s first World Series title in 86 years.

All of this makes tonight’s game against the Red Sox even more important, but there is some good news: The Dodgers odds of winning the World Series do get significantly better – thought still not great – should they win tonight.

Teams that go down 0-2 in World Series history, but manage to win Game 3, comeback to win the series slightly over 20% of the time.

There have been 54 teams to go down 0-2 in the World Series, but 11 of the teams that won Game 3 managed to stage a comeback and win the series.

Win tonight, and the Dodgers still have a decent chance at making at winning the World Series.

And if they lose tonight?

Well, let’s just say the Dodgers might want to hire the best script writer in town before showing up to play Game 4.