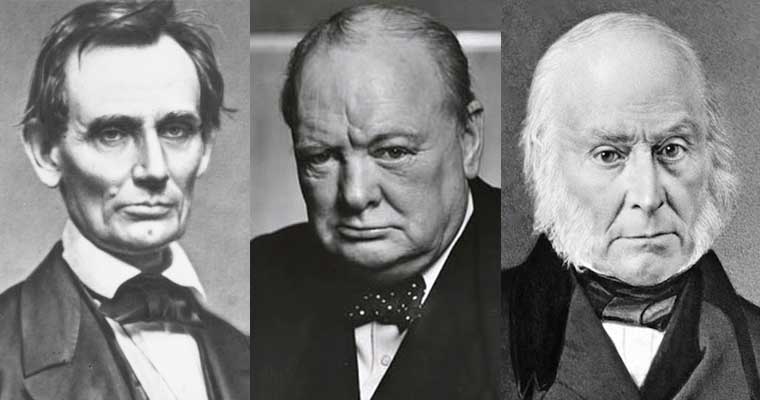 It goes without saying, voting on Election Day can be quite stressful.

And even more so when considering a nation’s balance of political power can swing widely to the left or right in just one night.

To lessen this burden during the 2018 Midterm Elections, we’ve put together a list of the wittiest quotes about voting and elections by some of the most famous and influential people in history.

In addition, we’ve included quotes that aren’t attributed to anyone specifically, having an unknown origin, but we felt some of these quotes were too good not to include.

“Thinking is not to agree or disagree. That’s voting.”–Robert Frost, American poet

“Elections belong to the people. It’s their decision. If they decide to turn their back on the fire and burn their behinds, then they will just have to sit on their blisters.”–Abraham Lincoln, 16th President of the United States

“Always vote for principle, though you may vote alone, and you may cherish the sweetest reflection that your vote is never lost.”–John Quincy Adams, 6th President of the United States

“The problem with political jokes is they get elected.”–Henry VII, former King of England

“In America, anyone can become president. That’s the problem.”–George Carlin, American stand-up comedian

“We stand today at a crossroads: One path leads to despair and utter hopelessness. The other leads to total extinction. Let us hope we have the wisdom to make the right choice.”–Woody Allen, American director and comedian

“The best argument against democracy is a five-minute conversation with the average voter.”–Winston Churchill, former Prime Minister of the United Kingdom

“Don’t buy a single vote more than necessary. I’ll be damned if I’m going to pay for a landslide.”–Joseph P. Kennedy, American businessman and politician

“Half of the American people have never read a newspaper. Half never voted for President. One hopes it is the same half.”–Gore Vidal, American writer

“If pigs could vote, the man with the slop bucket would be elected swineherd every time, no matter how much slaughtering he did on the side.”–Orson Scott Card, American novelist and professor

“I have never voted in my life…I have always known and understood that the idiots are in a majority so it’s certain they will win.”–Louis-Ferdinand Celine, French novelist and physician

“President Bush remained undeterred by the massive display of American opposition, even though much of it came from the hundreds of thousands of voters who supported him by voting for Nader.”–Jon Stewart, American comedian

“Bad officials are elected by good citizens who do not vote.” –George Jean Nathan, American critic and editor

“It is useless for sheep to pass a resolution in favor of vegetarianism while wolves remain of a different opinion.”–William Inge, American playwright and novelist

“Anti-intellectualism has been a constant thread winding its way through our political and cultural life, nurtured by the false notion that democracy means that ‘my ignorance is just as good as your knowledge.’”–Issac Asimov, American writer and professor

“In politics we presume that everyone who knows how to get votes knows how to administer a city or a state. When we are ill…we do not ask for the handsomest physician, or the most eloquent one.”–Plato, Greek philosopher

“In reality, there is no such thing as not voting: you either vote by voting, or you vote by staying home and tacitly doubling the value of some Diehard’s vote.”–David Foster Wallace, American writer and professor

“Democracy is a device that ensures we shall be governed no better than we deserve.” –George Bernard Shaw, Irish playwright and critic

“If you put your politicians up for sale, as the US does…then someone will buy them –and it won’t be you; you can’t afford them.”–Juan Cole, American historian of the Middle East and South Asia

“As democracy is perfected, the office of president represents, more and more closely, the inner soul of the people. On some great and glorious day, the plain folks of the land will reach their heart’s desire at last and the White House will be adorned by a downright moron.”–H.L. Mencken, American journalist and author

“…they say if you don’t vote, you get the government you deserve, and if you do, you never get the results you expected.”–E.A. Bucchianeri, American author

“Why pay money to have your family tree traced; go into politics and your opponents will do it for you.”

“George Washington is the only president who didn’t blame the previous administration for his troubles.”

“Politicians and diapers need to be changed often for the same reason.”

“Remember to set your clocks back one hour on Sunday. On Tuesday, be careful you don’t set the country back 50 years.”

“If voting made any difference, they wouldn’t let us do it.”