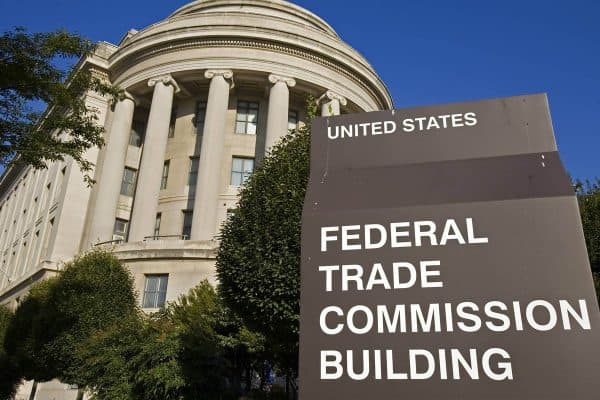 A merger between the two largest Daily Fantasy Sports (DFS) providers has been blocked by the Federal Trade Commission. DraftKings Inc. and FanDuel Inc. are attempting a merger that is believed to be pivotal for their success. The FTC has come out in opposition of the merger on the grounds that if allowed, the joint company would control 90% of the US DFS market—a market that holds a multibillion-dollar valuation. They are seeking a federal injunction to prevent the companies from joining forces. Sports betting proponents that believe DFS to be in direct competition with the establishment of US sportsbooks will not mind this move by the FTC.

The Boston-based DraftKings are considered one of the best startups in recent history and have been gaining popularity since their founding in 2012. New York-based FanDuel was founded in 2009. DFS has revamped the sports betting market and garnered more revenue with each year, though they have been stalled in certain regions by strict regulatory crackdowns. A lot of states have deemed DFS illegal, prompting individual states to compose legislation that would allow for DFS providers to service residents. Despite the bureaucratic slowdown, DraftKings’ reported revenue for 2016 was $169 million and FanDuel raked in $166 million.

These sites provide a format similar to basic fantasy sports, where players assemble teams composed of real players and compete against one another, only DraftKings and FanDuel offer cash prizes to their winners and there are daily and weekly competitions instead of season-long commitments. Both companies host roughly 5.5 million users and profit off percentages taken from entry fees. Eilers & Krejcik Gaming, a research firm, published a report estimating a total of $3.26 billion spent on DFS in 2016. With this type of figure, it is no wonder states have been imposing regulations on the market and why the FTC is moving to block this proposed merger-monopoly.

DraftKings and FanDuel stand by the notion that their competitors are the season-long fantasy sports providers like Yahoo and ESPN, however the FTC is under the impression that the two DFS companies are their own competition. The companies are potentially facing a tougher landscape with impending regulation and tax demands. In light of this, they proposed a merger that would share overhead costs in the marketing and legal departments. Marketing costs have proven to be quite expensive for both companies, and with the NFL season drawing nearer (the most profitable sports outlet for the companies), the pressure is on to reach a settlement on the issue. Industry analysts believe that the two companies can’t keep up with their extensive advertising costs, despite the incessant need for customer acquisition.

Legal experts have suggested an outcome in which the joint company withdraw from certain state markets and limit their DFS offerings on some sports. This would allow for smaller competitors to enter the market and slightly even out the overall widespread profits. DraftKings and FanDuel would likely not go for this due to loss in revenue and there is no guarantee the FTC would even support such a proposition. Another option would be for the two companies to surrender their merger and continue to exist as competitors, but the stagnant marketing and legal costs could prove too much.

The trial is set for November and there will be lobbying for both sides of the debate up until then. Many believe that the government will win the case, as DraftKings and FanDuel seem to have too much of a hold on the market to join forces. Perhaps the smartest outcome would be to allow the merger, legalize DFS in all 50 states and impose regulations, but the politics involved would likely never allow for it. DraftKings is expected to file for an injunction against the FTC, so there is potential for a favorable outcome.