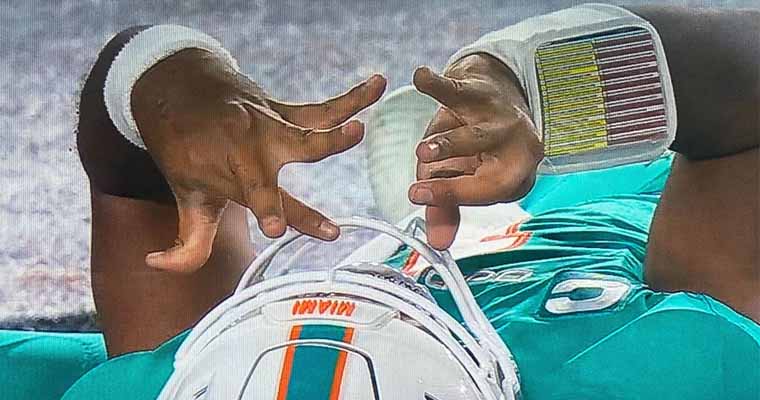 If you’re a football fan, then you’ve most likely heard about the frightening head injury that Dolphins quarterback Tua Tagovailoa suffered while playing against the Bengals. This was after he was previously cleared for play after suffering an earlier hit to the head during the Week 3 Bills game.

The neurotrauma consultant who cleared Tagovailoa was fired shortly after the injury, which appeared severe, with the starting quarterback experiencing a seizure – indicating neurological damage.

Despite the scare, Tua is reported to be recovering at a healthy pace. In accordance with the NFL’s concussion protocol, the Dolphins’ starting quarterback will have to be cleared before he can return to play.

How This Has Impacted the Dolphins

This uncertainty surrounding when Tua will be cleared to play bodes bad news for the Dolphin’s offense, who have also lost their backup quarterback, Teddy Bridgewater, during their Week 5 game against the Jets that ended with a whopping 40 to 17 blowout. Bridgewater was removed early after being declared possibly concussed.

With two quarterbacks down for a seemingly indefinite amount of time, there’s some distinct uncertainty as to what the odds hold for the Dolphins. When it comes to an online sports betting perspective, we are not expecting the Dolphin’s to be favored for Week 7.

Odds for the Dolphins – Vikings game:

These odds, provided by Bovada, are in favor of the Vikings taking the win Sunday. The point spread dictates that the Dolphins must win or lose by fewer than three points to cover the spread.

The future for the Dolphins

Considering that Tua is unconfirmed for being back for the Viking game, it’s no surprise that the odds are against the Dolphins to win. Not only that, but rookie QB Skylar Thompson is making his first career start on Sunday with Bridgewater also still in the NFL’s concussion protocol.

The Vikings have a solid 4-1 record and will most likely give the Dolphins a run for their money.

If you’re a Vikings fan, and you’re looking to capitalize on the situation, online sportsbooks can give you some options. A trusted online football betting guide can steer you in the right direction for accessing a legitimate betting site with current odds.

The Dolphins have a good chance of rallying once Tagovailoa is cleared for play. He has been reported to be returning to practice following concussion protocol guidelines.

Tua Tagovailoa to return to the practice field, still in concussion protocolhttps://t.co/oYfTrhmKzo

His suspected return for Week 7 would be great timing for the Dolphins if they want to avoid another potential embarrassing loss.

If have an interest in placing some bets this football Sunday, I recommend checking the state-by-state legal US gambling guide to see if you can utilize online sport betting sites in your area.