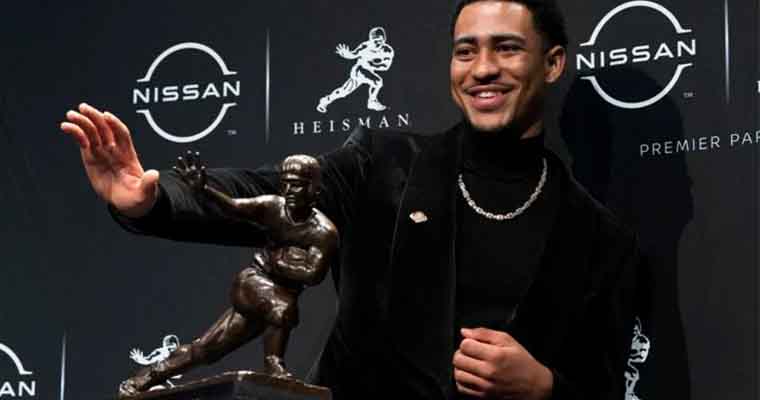 Heisman Trophy ballots for 2022 will not be distributed to voters until November 28th, but online college football betting sites have already weighed in with who they think will become the top NCAAF player in the nation when the honors are given.

The official Heisman Ceremony will be broadcasted on ESPN at 8:00 PM on December 10th, with the finalists being announced five days prior on the 5th.

The below odds to win the 2022 Heisman Trophy delivers an early peek at who those players could be and are open for action until the winner is revealed.

Ohio State Buckeyes quarterback CJ Stroud currently holds a sizable lead in the above odds to win the 2022 Heisman Trophy. If Stroud wins, he would become the eighth Buckeye to earn a Heisman, placing Ohio State in first place among all college football programs in the United States.

Currently, OSU is tied with the Notre Dame Fighting Irish and the Oklahoma Sooners with 7 Heisman winners apiece. However, Ohio State stands above all other programs when it comes to total trophies, with 8 wins during its history of playing NCAA Football.

That’s because Archi Griffith was the first player to ever win the Heisman twice, an opportunity that is on the table this season for Alabama quarterback Bryce Young.

Young won the award last season but is currently ranked third by legal US sports betting sites that have posted props for this year’s ceremony.

Bryce currently holds a +1000 moneyline, which means that payouts of $11 can be won on wagers of $1 if Young hoists another trophy on December 10th. It is hard to think of Young as an underdog here, but the odds do place him with a very low probability of winning.

Coming in 2nd is USC QB Caleb Williams whose Trojans are fourth overall in total Heisman wins with 6. The University of Southern California can pull into a 4-way tie for most winning players all-time if Williams becomes the 2022 Heisman Trophy winner, and the odds suggest it is either he or Stroud that will get it done.

Of the top ten players listed on the boards, only two of them are non-quarterbacks – Michigan Wolverines running back Blake Corum and Alabama RB Jahmyr Gibbs. Here are their current stat lines as of early October.

Neither running back appears poised for a 2,000-yard campaign, but they clearly possess the talent to carry the load based on what they deliver when they do touch the ball.

Keep checking the sites included in our legal online sportsbook reviews to see if the Heisman odds change, or bet now if you have a hunch at who the winner will be this December.