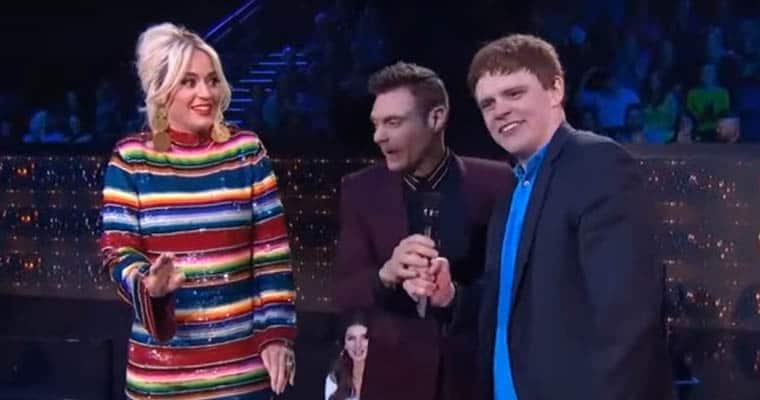 Before starring in a string of 90s box office blockbuster hits – such as Ace Ventura: Pet Detective and Dumb and Dumber — that launched him into Hollywood superstardom, we believe that comedy actor Jim Carrey could have led a double life.

Or so we think based on what we saw on this past episode of American Idol that aired on Sunday, May 5, 2019.

After a lengthy segment where he gets to talk to long-time host Ryan Seacrest and hug contestant judge Katy Perry, there’s no denying the uncanny Carrey resemblance of this guy that calls himself “Will.”

There’s only one explanation: William must be the long lost love child of none other than Jim Carrey – a child he has kept hidden from the public eye this whole time.

Reasons we believe “Will” is Jim Carrey’s love child based solely on similarities:

Like father like son as the saying goes, after all. We think the odds are heavily in our favor on this theory.

But maybe we rushed to judge, because, after all: Maybe Jim Carrey has no clue that he has a love child!

It’s entirely possible, after all. Stories of famous people in Hollywood having children that they have no clue about pop up years – and sometimes, even decades – after the night of conception.

Just say Yes Man, and accept that this is Jim Carrey’s love child or at least a look-alike at the very least.

But with that settled, we must now wonder: Who is the lady that gave birth to the love child?

That is the Bruce Almighty question we must ponder and ultimately answer.

Some women that immediately come to mind include Irene from Me, Myself, and Irene but that came out in 2000 so that’d be far too recent since Will appears to be much older than 19 years old.

How about Jane from Fun with Dick and Jane? Or the woman (Kate Winslet) he’s trying to delete from his memory in Eternal Sunshine of the Spotless Mind? The latter of which would actually make sense when it comes to a love child.

That’s even less likely since those movies are from the mid-2000s, respectively.

Originally, our best guess was that it has to be none other than Mary Swanson from Dumb and Dumber and that Larry did, in fact, beat the odds after he calculated that there was indeed a chance of them being together.

The year 1994 would match up better with Will’s age but we think he’s a tad on over that when it comes to his current age. Somewhere in the mid-30-year-old range would be perfect.

So we’re looking for a movie made in the mid-80s.

And we think we’ve found it.

In 1986, Jim Carrey played a supporting role in the Academy Award-nominated movie Peggy Sue Got Married, which was directed by Francis Ford Coppola and starred none other than Kathleen Turner.

Mrs. Turner must be the missing link between Jim Carrey and Will from American Idol — it all makes perfect sense and we didn’t even need to get to The Number 23 reason for why this is the case.

While this could potentially be a groundbreaking discovery we’ve un-Mask-ed, there is one other possible explanation: This enthusiastic American Idol fan that has a very strong resemblance to Jim Carrey could simply be a doppelganger.

While we don’t want to push all our chips into this possibility, it’s certainly one that we can’t say gets our “Liar Liar, pants on fire, hanging from a telephone wire” rating.

But “all righty then” that just about wraps up our theory on the mysterious Will from this past week’s episode of American Idol.

Now, if someone could just let Jim Carrey know about his long lost love child, that’d be “SSSSSSSSSSSSSSSSMOKIN’!!!”