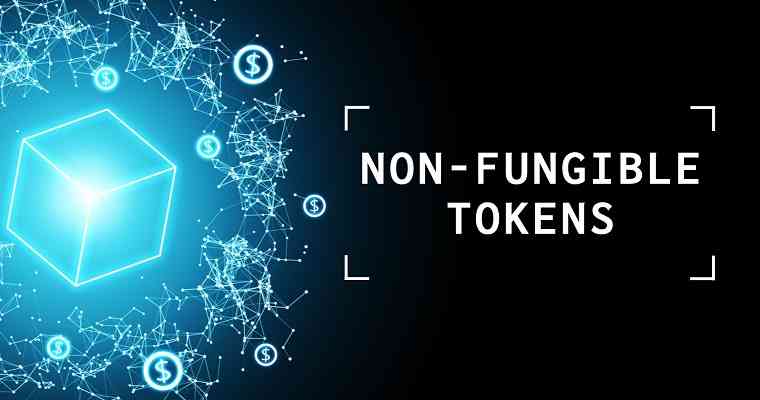 Unless you’ve been living under a rock (which is perfectly fine – we often yearn for such solitude ourselves), you’ve probably heard about NFTs.

They’re all the rage, and people are making millions of dollars seemingly hand over fist.

But even if you have heard of NFTs – say, by the watercooler or K-Cup machine or whatever analog actually fits into the 2021 workplace – you may not fully understand what they actually are.

Well, we’re not going to take you down that rabbit hole, because it’s endless number theory and loads and loads (and loads!) of jargon.

Instead, we’ll give you the layman’s take:

NFTs, or non-fungible tokens, are unique tradeable assets on a given blockchain network.

Currently, the vast majority of NFTs are made for the Ethereum blockchain, but any blockchain capable of smart contracts should be able to host NFTs.

Tron, Eos, and Neo have recently released NFT standards for their networks, and popular cryptos like Cardano (ADA) are entering the smart contract era this month, so ADA NFTs won’t be far behind.

Explaining NFTs can be as complex or as simple as you like, and though we’re going with the latter approach, you should by all means continue to research the concept if it interests you.

In either case, it has, as they say, legs.

In addition to the revolutionary nature of NFTs, they’re also exceptionally good at making the idea of cryptocurrencies and blockchains accessible to the general public.

Have you recently heard about these NFTs from an acquaintance that has, until now, shown no interest whatsoever in cryptocurrency? Or, perhaps, one that has even been openly antagonistic or hostile towards the idea of digital alternative currencies in general?

And that speaks to the non-fungible token’s ability to quantify – in an experientially rational way – the utility of the blockchain (and thus, cryptocurrency itself) to people on the sidelines.

In other words, NFTs will help huge numbers of people functionally understand the utility of crypto in accessible, logical ways.

That’s why the initial wave of NFT hype is predicated on digital artworks and small snippets of media. These are more apt as metaphors for the physical world, and they are things you can look at and take in with your eyes and ears.

The NBA is selling NFTs of video clips of slam dunks, for example, while digital artists are selling their works at various up-and-coming NFT auction houses.

But since you can’t “own” a video clip or a JPEG of some weird Photoshopped collage any more than anyone else who downloads the file in question (unless, of course, you are literally the file’s creator), NFTs give such things a trackable, traceable provenance.

We’ll use the recent video of the LeBron James dunk that the NBA sold for more than $200,000 as an example.

In the real world (that is, the meat world of physical objects we know and love), you can own a basketball card.

It might even be worth a lot of money.

If Panini or Fleer snapped a photo of that LeBron dunk and printed the image for a limited edition run of trading cards, you could “own” that dunk. As would many others.

But who owns the actual dunk itself?

LeBron made the play in question, so he kind of owns it.

The NBA filmed the dunk and holds the copyright to the video, so they kind of own it, too.

But nobody really “owns” the event itself.

When the NBA took that footage of LeBron throwing down, it was there for all to see. Heck, you can find the exact clip in question on a million sites and download it if you want.

But then the NBA took that clip, associated it with a unique token on the Ethereum blockchain, and sold it to someone for an astronomical sum.

Now, that fleeting event – that moment in time recorded on camera – is being traded actively.

Thus, NFTs are able to quantify and monetize not just things like digital artworks but actual events that were – until now – not even conceptually tradeable outside of people sharing the MPEGs and YouTube links.

Of course, you can apply this concept to any recorded event.

And that’s where the gambling market can capitalize on NFTs.

Let us paint a digital picture for you using all of the main gambling markets: online sports betting, online casino gaming, and online poker.

For brick-and-mortar or online sports betting, imagine any such scenario where a high roller makes a newsworthy wager.

A couple of years ago, one “crazy” bettor, James Adducci of Wisconsin, wagered $85,000 on Tiger Woods to win the Masters. Tiger hadn’t won in ages, so the shocking bet was an instant media sensation.

Then, when Tiger actually won, Adducci earned a $1.2 million payday.

This is one of the most famous bets in golf history, and had that wager been tied to a unique NFT on Ethereum or any other blockchain, the actual event of the bet could be sold.

Other bettors, golf historians, links enthusiasts – literally anyone – could purchase this piece of otherwise ephemeral history.

And, had the sportsbook in question tied this wager to a tradeable NFT, they could have recouped some of their massive losses.

Of course, as soon as Adducci won that $1.2 million, he immediately wagered $100,000 on Woods to win the three other 2019 majors, i.e. the Grand Slam. He obviously lost that bet and was largely panned for even placing it.

But because this wager was also newsworthy – despite being a losing bet – it would similarly have value as an NFT.

Again, the book that took the bet would simply tie the transaction to a unique ID on the blockchain, and then they could “sell” that piece of history. For that matter, Adducci himself could have done the same.

For casino gambling, online or in-person, the concept is identical. And while our example predates NFTs, it still serves the purpose.

If you don’t know who Don Johnson is – the gambler, not the actor – you should read about him. For any gambler, the story of how Johnson broke Atlantic City is the stuff of legend.

Frankly, we’re amazed it hasn’t been made into a blockbuster Hollywood heist movie yet.

The long and the short of it is that Johnson went to AC in 2012, and over the course of about two weeks, he managed to win over $15 million playing blackjack.

As part of that spree, per The Atlantic, Johnson was dealt the sketchiest sequence of cards imaginable and won $800,000 on a single hand:

“[The] $800,000 hand started with [Johnson] betting $100,000 and being dealt two eights. If a player is dealt two of a kind, he can choose to “split” the hand…and ask for two more cards, in effect doubling his bet. That’s what Johnson did. His next two cards, surprisingly, were also both eights, so he split each again. He was now playing four hands, each consisting of a single eight-card, with $400,000 in the balance. …

The house busted, and Johnson won the wager.

Had NFTs existed back then, and had the house tied that sequence to an “official” NFT on the blockchain, any gambling enthusiast could literally own that particular piece of history.

And, of course, for the house, the sale of that NFT would have helped recoup some of those losses.

(It should be noted that Johnson himself could have made an NFT of the event – in fact, both parties could have and still could – and profited all the more.)

We scarcely need to provide a separate example for retail or online poker gambling, but imagine a scenario – and these shouldn’t be hard to envisage, as they happen all the time – where a player is all in at the final table with a hand that’s got a 99% chance to lose until that river card gives him three of a kind and sinks the other guy.

When such a bad beat (or good beat, depending on your perspective) occurs – if it’s momentous enough and on a big enough stage – an NFT could be made by any party involved – the winner, the loser, or the house/promotion itself.

And it’s only a matter of time.