Skip to content
HomeNewsNick Saban Becomes the G.O.A.T. if He Wins a 7th National Title 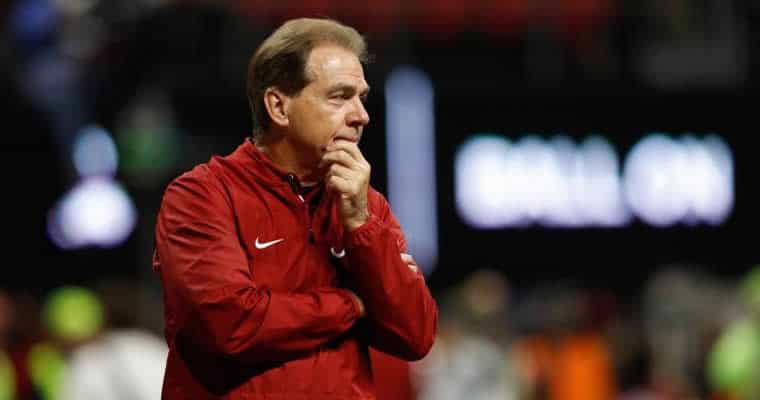 Those were the words from Nick Saban on January 4, 2007, during his introductory press conference after being named the new head coach for the Alabama Crimson Tide.

Five national titles later with Alabama plus one previously with LSU, Saban can go down as the greatest of all-time to ever coach college football should his No. 1-ranked Alabama team win the 2019 College Football Playoff National Championship on January 7, 2019.

The win would give Saban his 7th national title, more than any other head coach in the Poll Era of college football, which dates back to 1936.

But he has never focused on those sorts of things because he leaves talks of legacy and history to writers, such as yours truly, and anyone else outside the culture of winning he has created.

At this very moment, the only thing he’s focused on is preparing his team to beat No. 4 Oklahoma in the Orange Bowl playoff semifinal game on Dec. 29.

“What happened yesterday is history. What happens tomorrow is a mystery. What we do today makes a difference – the precious present moment.”

And Saban is a coach that has lived in the present perhaps better than anyone in sports ever has and what he has accomplished in the most competitive, cut-throat environment that college football has ever seen is nothing short of exceptional.

His demeanor may be off-putting to many, and he hasn’t always at handled questions and conversations in the most ideal way, but Saban nevertheless remains consistent and direct to anyone he encounters.

Cutting corners when doing anything is not an option.

It’s one of the many reasons why his players have respect for his coaching style. They know he’s going to push them to their limits and take every step necessary to do ensure the team does one thing above all else: win.

And his Alabama players have bought in ever since he became the head coach in 2007. Every recruiting class he’s brought in while with the Crimson Tide has won a national championship.

His quote “You can’t get from A to Z by passing up B” is a personal favorite of mine because it exemplifies who he is as a person: a meticulous perfectionist.

The quote means essentially means from the start, you can’t take a shortcut to reach the end goal and cutting corners at any step in the process of becoming a champion is not an option.

This extends to focusing an equal amount of attention and giving 100 perfect effort to all phases of college football whether it be nutrition, training, practice, education, fundamentals, player development, and planning for the next opponent on the schedule.

Every bit of it matters on the path to greatness in Saban’s mind, and football coaches for generations to come will likely use it as a blueprint and apply it to their own coaching philosophy.

When mirroring the quote to that of a full season, it’s safe to say Saban and the Crimson Tide are well past “B” this far into the 2018 season.

If the game against Oklahoma is “Y” then that makes the national title game the “Z” a.k.a. the finish line.

But this season it’ll be a different kind of “Z.”

After all, if this season ends with Saban getting to “Z” he’ll go down as the greatest coach in college football history.