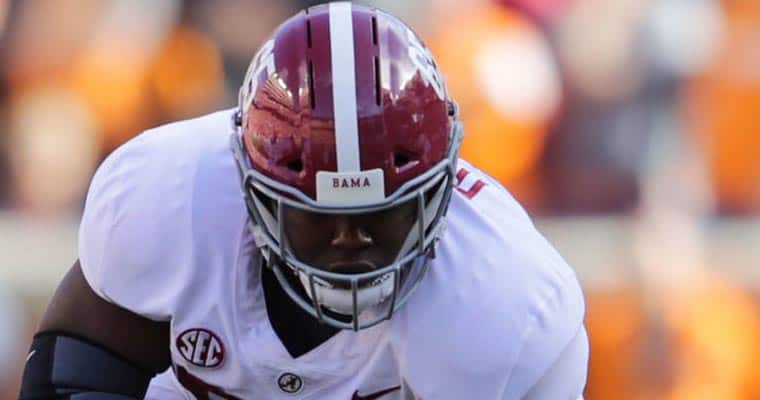 The top-ranked team in the country will need to plug a hole on the offensive line in less than a week.

No. 1 Alabama Crimson Tide has suspended starting left guard Deonte Brown for the College Football Playoff semifinal matchup against No. 4 Oklahoma Sooners in the Orange Bowl.

Alabama head coach Nick Saban made the announcement on Monday night, Dec. 24, citing the suspensions of his three players are “due to a violation of team rules and policies.” The three players did not travel with the team to Miami, Florida.

The Crimson Tide remain a 14-point favorite against the Sooners even with the team’s starting left guard suspended.

Brown has been a solid addition to the offensive line since taking over the role at left guard, boosting the Alabama rushing attack and allowed the offense to average 5.6 yards per carry in the latter half of the season.

The 6-foot-4, 344-pound sophomore offensive lineman became the starting left guard midway through the season, replacing senior and Tuscaloosa native Lester Cotton. Brown had started five of the past six games for Alabama – only missing the Nov. 17 matchup against The Citadel due to injury.

Alabama offensive coordinator Mike Locksley told ESPN that Cotton, a 6-foot-4, 325-point offensive lineman, will take the place of the suspended Brown, and he’s confident that Cotton will be ready and fully prepared before Saturday night.

“Deonte played really well for us coming into this season, but we have a lot of confidence in Lester,” said Locksley. “All the games that he started around here. We’re fortunate to be able to have that type of depth to where when you lose a guy like Deonte, you have a three-year starter like Lester Cotton there ready to go.”

James, a backup tight end, has played in five games for the Crimson Tide during the 2018 season but has not recorded a reception, and Baker, a reserve offensive lineman, has not appeared in any of Alabama’s games this year.

No. 1 Alabama will take on No. 4 Oklahoma on Saturday, Dec. 29 at 8 p.m. ET in the Orange Bowl. The winner will advance and play in the College Football Playoff National Championship on Jan. 7 against either No. 2 Clemson or No. 3 Notre Dame.