Skip to content
HomeNewsKyler vs. Tua: The Orange Bowl Battle Between Heisman Winner and Runner-up 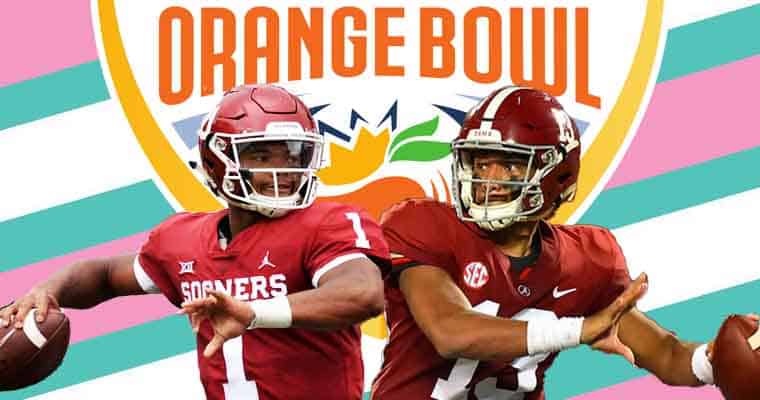 Dec. 29 marks the date of revenge for the No.1 Alabama Crimson Tide, who will take on Murray and the No.4 Oklahoma Sooners in primetime at the Orange Bowl in the second College Football Playoff semifinal game.

College Football Betting sites currently have Alabama as a 14-point favorite against Oklahoma for the Orange Bowl matchup between the Heisman winner and runner-up.

Tagovailoa spent most of the season as the Heisman front-runner, which saw the Crimson Tide roll over opposing teams each week, beating every team by 20-plus points throughout the season.

Murray was a close runner-up all season and beat arch-rival Texas in the Big 12 Championship, accumulating 400 yards of total offense and passing for three touchdowns and capturing Oklahoma’s fourth-straight conference title.

Then came the SEC Championship game against the Georgia Bulldogs, which saw Tagovailoa appear mortal for the first time all season.

Before leaving the game with a high ankle sprain, he had completed 10 of 25 passes for 164 yards and threw a touchdown, but he also was picked off twice, which doubled his impressively low season total.

Tagovailoa would finish the regular season completing 67.7 percent of his passes for 3,353 yards, 37 touchdowns, and 4 interceptions while rushing for 190 yards and 5 touchdowns.

On the flip side, Murray would complete 70.9 percent of his passes on the year for 4,053 yards, 40 touchdowns, and 7 interceptions while rushing for a whopping 892 yards and 11 touchdowns.

Murray also finished with a 205.7 passer rating, the highest ever recorded, but Tagovailoa would post a 202.3 rating – ranking him second all-time in passing efficiency.

Murray ran away with the most first-place votes for the Heisman Trophy, placing first on 517 of 878 ballots while earning 2,167 points. Tagovailoa received 299 first-place votes and received the most points ever by a Heisman runner-up with 1,871 points.

But the Crimson Tide faithful were having none of it, believing they were robbed since Tagovailoa plays in the SEC, the conference many consider to be the toughest in college football right now, while Murray plays in the Big 12, which is notorious for playing something called “defense,” but it doesn’t really resemble what the rest of the country is doing.

Regardless, Murray took home the 2018 Heisman Trophy, and nothing is going to change that fact.

However, there is a spot in the national championship on the line, and the Tide would love nothing more than have their defense smother Murray and see Tagovailoa shred the Sooners paper thin defense (which gave up 32.4 ppg compared to the Tide’s 14.8 ppg).

The Kyler-Tua matchup will be the seventh game in history to feature the Heisman winner facing off against a runner-up in a bowl game.

However, history is not kind to the winner of the Heisman Trophy, who have only won two out of the six bowl games against the runner-up.

The game will kickoff at 8 p.m. ET at Hard Rock Stadium in Miami Gardens, Florida.

Just remember to mark #Dec29 on your calendar.