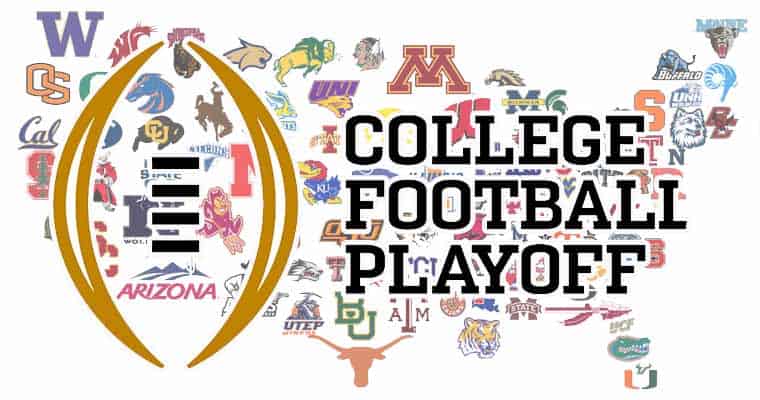 Your school has never earned a national title.

Well, in the NCAA Division I FBS, anyways – which is the highest level of collegiate football competition.

But yes, you heard that right. And why, you might ask?

Because Division I FBS has never had a legitimate system in place to declare a national champion and instead, has chosen to rely on rules that judge a team’s pageantry rather than one that will simply reward teams based on wins and losses – like what is found in most sports in the United States and around the world.

Don’t get me wrong. Any single game of college football contains some of the most brilliant spectacles in all of sports and is filled with rich traditions and celebrations every time a team takes the field on Saturday’s during the Fall.

It’s a shame the system college football fans have been subjected to since the 19th century makes all the games played and all the pomp and circumstance totally meaningless.

How We Got Here

College football and the American gridiron game we know today dates back to November 6, 1869, when Rutgers defeated New Jersey (now Princeton) by the score of 6-4.

Since then, we’ve used the following methods to “determine” a national champion in Division I FBS:

Sportswriters Poll – The AP Poll is most frequently used for title wins, but there are dozens of media outlets who’ve awarded national titles since the late 19th century, so if you want to hand out a title, then just start writing news and you’ll be just as credible.

Mathematical Systems – The use of mathematical formulas has been around nearly a century, and the Dickinson System became the most popular, crowning national champions from 1926 to 1940. While useful for college football betting and arguing about team rankings, formulas should not be used in place of strict “black-and-white” rules.

Coaches Poll – A panel of randomly selected coaches who fill out a ballot weekly, which has ranked the top teams since 1950. Because nothing says legitimate like allowing people who couldn’t have watched all the games – because they coached their own team on the same day – determine rankings and a national champion.

U.S. President – Yes, President Nixon declared No. 1 Texas the 1969 national champion after beating No. 2 Arkansas. Penn State finished that season with a record of 11-0, by the way. Fortunately, this was the only time Tricky Dick or any other POTUS would award a national title.

Gentlemen’s Agreements – Also known as the Bowl Coalition (1992-1993) and the Bowl Alliance (1995-1997), where the then-Division I-A college football bowl games and conferences agreed to force a national championship game to be played between the top two teams. The problem? The Rose Bowl, which forced the winner of the Big Ten and Pac-10 (Now Pac-12) to play in its game.

BCS Computer Ranking – From 1998 to 2013, it was decided that Division I FBS should combine the human polls and various computer selection methods to determine team rankings and who will play in five bowl games, which includes the top two teams playing for a national title. After much controversy and changing of the computer formula, it was scrapped in 2013.

CFP Selection Committee – Since 2014, a 13-member committee has selected the “top four” teams in Division I FBS and seeded the teams in a four-team “playoff” with the goal of settling the controversy surrounding the BCS by crowning a true national champion. However, the opposite has happened most years and now many fans want the CFP to expand to include 8 teams.

But We Still Have Hope

Nearly a century and a half later, we are still without a legitimate system to determine a national champion in the most competitive level of college football. Just one look at this list of “past national champions” is enough to make a person’s eyes bleed with the sheer amount of “claimed” and “awarded by” national titles.

Nothing screams “champion” like having six – yes, SIX – teams awarded the title in 1921 and 1981 by who the hell honestly even cares at this point.

And in case you didn’t know: Division I FBS football is the only National Collegiate Athletic Association sport that does not have a sanctioned championship event held annually.

The NCAA does keep official records and has created and maintained a list of “major selectors” for the national championship but the governing body itself has never endorsed a championship team – only documenting what others believe.

If you still think your school rightfully earned their title, then that’s fine. But can’t we all at least agree that we can do better? Is coming up with a system to legitimately name a champion as challenging as people make it seem?

The New Era of College Football 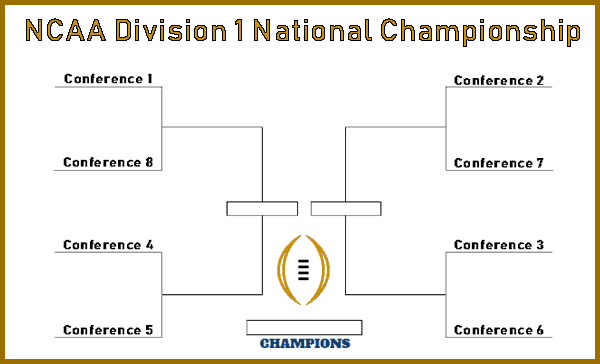 The first step is to create an easy-to-understand set of rules that outline how the format for determining a national champion should be set up.

Will Be Even Better

Now we need to know exactly how many teams we’re working with for each level of play.

As of 2018, this is how the NCAA breaks down its levels of competition:

Using these numbers, here’s how the new NCAA levels under the new format would work and we’re renaming “Division” to “Tier” since that simplifies things a bit:

We went over the amount need (128×5=640), but that’s okay since the teams from the “Pool” can be any amount. The main goal was to have five tiers in total eligible for NCAA football.

Now here’s where it gets interesting. This system is good enough on its own and could be implemented today. The bowl games could even be implemented as the playoff games and teams who didn’t make the 8-team playoff could still get a bowl game as an exhibition game.

So how can we make all of this even better?

Well, what if there was only one national champion crowned in the entirety of college football each season with the Tier I winner awarded this title.

That means there is only one playoff out of every tier and only one team in the entire country can be champion.

“But this isn’t fair to the smaller schools!” you might say. And you’d be right until you examined this:

To give teams in Tier II, III, IV, V, and even the pool teams a chance at playing football in the most competitive environment possible.

Should the Tier 1 team lose, they will take the Tier 2 team’s spot in Tier 2 for the next season and vice versa.

No exemptions are given – even if the Tier 1 team won the title the previous year – and if the worst team in each conference for each Tier wants to show they belong in a higher Tier, then they’ll easily climb up next season and take back their spot – being applicable to any “pool” teams wanting to join the Tier system and move up the ranks.

At the end of the day, the goal here is to create a system that throws out all human judgment, mathematical systems, computers, and any other outside factors.

Regardless of what system we choose to use next for college football, we should agree to use a standard set of rules before the beginning of the season, where the qualifications to make the playoffs are clearly drawn out and meeting that set bar qualifies a team for playoffs and eventually a national championship.

Not doing so continues the cycle of illegitimate champions and further devalues the accomplishments for some of this generations’ greatest athletes.

But if we do this, then without question, controversy, or conspiracy, we would all finally know who the best team in college football is at the end of each season, and finally, give the game the rightful champion it deserves each and every year moving forward.