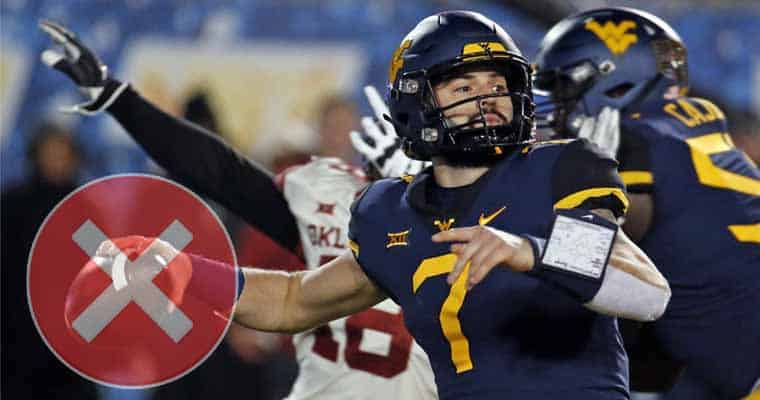 When millions of dollars can be lost due to injury, it’s not hard to see why potential first round picks are now choosing to skip the meaningless “exhibition” bowl games.

A lot of the growing fear from college football stars started when Notre Dame junior linebacker Jaylon Smith tore his ACL and MCL halfway through the first quarter against Ohio State in the 2016 Fiesta Bowl. Before the injury, several scouts ranked him as one of the best linebacker prospects this century and Smith himself believed he’d go high in the first round.

The Cowboys took a chance on him with the 34th pick in the 2nd round of the 2016 NFL Draft. The picked worked out for the Cowboys, who got one of today’s best young linebackers early in the 2nd round.

Top prospects like Leonard Fournette and Christian McCaffrey also chose to skip the bowl games to avoid injury and prepare for the draft, and the number of players who choose this route grows by the year.

Here are the top prospects for the 2019 NFL Draft that will be skipping their bowl games, so be sure to assess their absence when wagering on any of the betting lines this bowl season.

The speedy receiver for the Gamecocks came back with a solid 2018 after breaking his leg in the third game last year, ending his season as a result. This season, Samuel led the team with 62 catches, 882 receiving yards, and 11 touchdowns. He also finishes his career with 4 kickoff returns for touchdowns, a school record. No single wide receiver is expected to fill his role and will likely try many receivers out during the game.

The 6-7, 320-pound left tackle chose to sign a contract with an agent, which makes him ineligible to play another down of college football. He recently had surgery on his knee, and his draft outlook is not promising. However, he’s skipping the bowl in hopes of changing that after being named an All-Big Ten honorable mention. Sam Schlueter is expected to assume to the role at left tackle.

Before the start of this season, the 6-3, 292-pound defensive tackle was projected to be the first player off the board in 2019, but injuries hampered his production this season, causing his value to dip just a little. Oliver said he’s already working to regain that top spot. It’ll be hard to replace his career production of 193 tackles, 54 for loss, 13.5 sacks, 14 defended passes, 6 forced fumbles, 1 fumble recovery, and a blocked kick. Currently, no single player is in line to replace him, and the Cougars will likely rotate some of their young guys at defensive tackle.

Another big blow for the Wolfpack was the announcement that Pratt, who led the team in tackles with 104, 10.5 for loss as well as racking up 6 sacks, would be skipping the bowl along with receiver Kelvin Harmon. The linebacker was named All-ACC and Brock Miller will likely be the next guy up.

Many scouts believe he is one of the best cornerback prospects in this class with many describing him as a true lockdown corner. Williams is a Thorpe Award finalist this season, which is awarded to the best defensive back in the country. Replacing a player who can shut down half of the field is a difficult task, but LSU will likely turn to Kristian Fulton to be their shutdown cover corner.

Hill was named All-Big 12 despite being dinged up a bit late in the season. Regardless, the 5-10, 190-pound running back is considered one of the fastest at his position in college football, rushing for 930 yards, 9 touchdowns while averaging 5.9 yards per carry. Chuba Hubbard will resume his role as the starter after having some big games in Hill’s absence.

Harmon had an impressive junior season, racking up 81 catches, 1186 receiving yards while hauling in 7 touchdowns. His receiving total this season is fourth-best for a single-season in school history. Junior Jakobi Meyers, who had an amazing year as well, will see a lot more targets and Sophomore Emeka Emezie will likely fill Harmon’s role.

He started all 12 games this season in his sixth year of eligibility and had the best year of his college career after being suspended from East Carolina and playing at Hutchinson C.C. before finally making his way to Oklahoma State. Redshirt senior Deionte Noel will replace Williams, but only for the bowl game.

Scouts believe the 6-4, 221-pound WR has the potential to be an elite receiver at the next level, and this season he proved it, finishing with 73 catches, 1,088 receiving yards and 9 touchdowns. He finishes his career third in school history with 213 catches and 2,889 receiving yards and fifteen in touchdown receptions with 22. Expect Brandon Aiyuk to fill the void left by Harry.

Many scouts believe Fant is the best tight end prospect in at least the past five years. He finished his career with 78 catches, 1083 yards receiving and 19 touchdowns, earning first-team All-Big Ten honors this season. T.J. Hockenson, who played a big role for the Hawkeyes this season, will likely see even more passes come his way.

He was the No.1 high school recruit in the country and became the anchor for the Wolverines top-ranked defense over the past three seasons. He missed a couple games because of injury, which likely was a factor in his decision. Kwity Page, who was a 4-star recruit, will fill the hole left by Gary.

Grier skipping the Mountaineers bowl game against Syracuse significantly lowers their chances of winning. There’s a reason he was a Heisman candidate for most of the season, passing for 3,864 yards and 37 touchdowns while leading the team to an 8-3 overall record. Miami-transfer Jack Allison is expected to be the next guy up.

Cajuste was named Big 12 Offensive Linemen of the Year this year and has played this entire season at left tackle while protecting the blind side of QB Will Grier, who will also be skipping the bowl game. Kelby Wickline, who is the son of the offensive line coach, will likely take his place.