Skip to content
HomeNewsFirst Bowl Canceled Due to Weather: How it Impacts Bets, Pools, and More 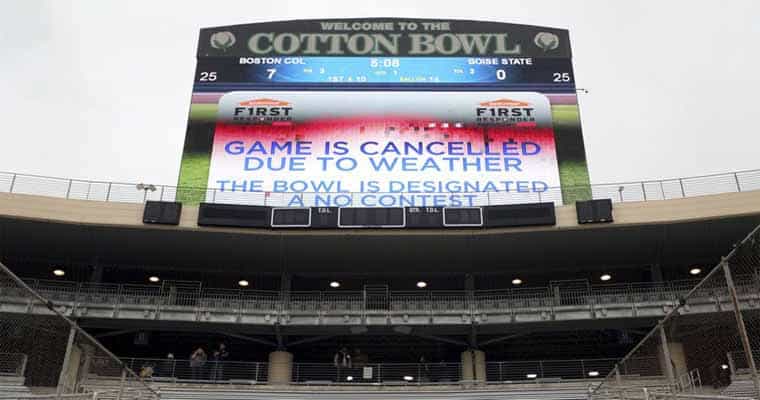 In the 117-year history of college football bowl games, there has never been a bowl called off due to weather.

But lightning struck for the first – and surely not the last – time on Wednesday.

A First in FBS Bowl History

The 2018 SERVPRO First Responder Bowl featuring the Boston College Eagles and No. 25 Boise State Broncos was canceled after a delay of roughly one and a half hours due to the threat of severe weather.

According to NCAA spokesman J.D. Hamilton, the First Responder Bowl is believed to be the first Division I FBS bowl game ever canceled because of the weather.

Before the First Responder Bowl on Wednesday, Dec. 26, the only canceled postseason FBS game on record was Hawaii’s planned second postseason game in 1941 against San Jose State, which was canceled because of the attack on Pearl Harbor.

The game was stopped at 12:59 p.m. CT with 5:08 left in the first quarter. Boston College was winning 7-0 after running back AJ Dillion ran in a 19-yard touchdown.

Boise State had just received a punt from Boston College and was ready to take over on their own 14-yard line.

Lightning struck within eight miles of the Cotton Bowl Stadium in Dallas, Texas, and according to NCAA, the game must be delayed for 30 minutes.

After lightning continued to strike and after bowl representatives looked at the forecast for the area, it was a unanimous decision to cancel the game.

“In the interest of safety for our teams and fans, the 2018 SERVPRO First Responder Bowl was unable to be continued,” Brant Ringler, the bowl’s executive director said in an ESPN Press Release. “The decision was made after lengthy consultation with emergency personnel, both universities, ESPN and Cotton Bowl Stadium staff.”

The game was officially canceled at 2:20 p.m. CT. Quickly after, the bowl’s official Twitter account announced that the game would be ruled a no contest.

The game has officially been ruled a no contest.

Point Spread and O/U Bets: Boise State was a 2.5-point favorite and the over/under was 51. Any bets on the game will be graded as no action since a makeup game will not be played. Rules vary based on the rules from the sportsbook, but most should refund the money placed on the game.

Parlays and Teasers: For both, the matchup will be treated somewhat like a push. Example: A three-team parlay becomes a two-team parlay. The odds and payout will be adjusted, but any parlays and teasers will remain alive.

Bowl Pools: This is dependent on who is hosting the challenge. For confidence pools, some will assign the game a 0 and move every other game ahead of it and others will declare both teams the winner so everyone is awarded points. Just be sure to check at the place where you’re playing for specific details.

Refund Game Tickets: Ticketholders of the 2018 SERVPRO First Responder Bowl will be able to get a full game ticket refund or get tickets to next year’s game free of charge along with two additional tickets at no cost. Just email info@firstresponderbowl.com to put in your request.

Stats Recorded: Because the game has been ruled as a no contest, it will be as if it never happened and no stats recorded in the bowl will count, including AJ Dillion’s touchdown. Boston College will finish the season with a 7-5 record while No. 25 Boise State finishes with a 10-3 record. Bowl appearance streaks will be kept intact since the teams did earn the bowl appearance even though the game wasn’t played.

SERVPRO, which is a Tennessee-based franchise for fire and water cleanup and restoration businesses, is the official sponsor for the First Responder bowl.

Now that that bowl has been ruled a no contest and will be erased from the record books, the company’s copyrighted slogan couldn’t be more fitting:

It’s almost too good to be true, and if you can’t believe it either, check out this video ad by SERVPRO.