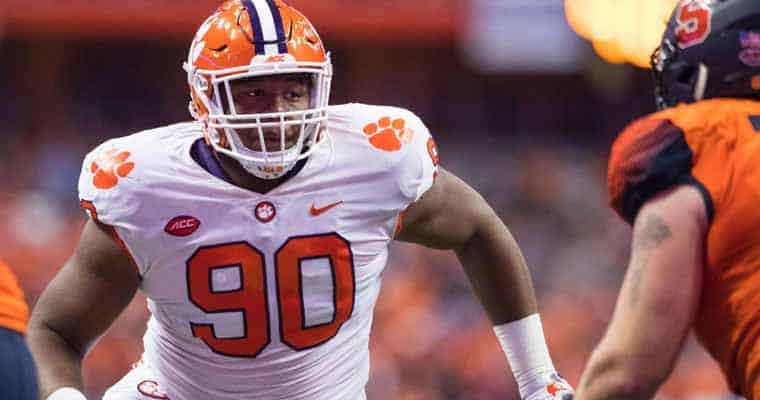 The NCAA has upheld the suspensions of Lawrence, along with tight end Braden Galloway and offensive linemen Zach Giella, after the B samples from their drug test also tested positive for trace amounts of a banned substance known as ostarine.

The No. 2 Clemson Tigers are currently a 12.5-favorite against the No. 3 Notre Dame Fighting Irish, falling half a point after news broke about the initial samples testing positive.

“This evening, Clemson Athletics received confirmation from the NCAA of suspensions for tight end Braden Galloway, offensive lineman Zach Giella and defensive tackle Dexter Lawrence, all three of whom will be unavailable for Saturday’s game against Notre Dame, said Clemson director of athletics Dan Radakovich in a statement on Thursday night. “The athletic department will have no further comment on the matter this evening as it considers all of our options, including appeals.”

On Monday, Clemson head coach Dabo Swinney told reporters during a news conference after the Tigers arrived in Dallas that the athletic department was notified by the NCAA about the failed drug test of three players,

The drug tests were conducted on Thursday, Dec. 20 and found traces of ostarine, also known as enobosarm, which is a substance used to treat osteoporosis and can act as an anabolic steroid to generate lean muscle.

Ostarine is not approved by the FDA and is illegal to sell in the United States. There have been cases of it being used in supplements without being displayed on the label.

According to the NCAA’s policy for a failed performance-enhancing drug (PED) test, collegiate athletes who test positive for a banned substance can submit another sample, also known as the “B sample.” If the B sample comes back positive as well, then the university can appeal the suspension, which is can be up to one calendar year.

Clemson plans to appeal the ruling, but that process will not finish before the semifinal matchup against Notre Dame on Saturday, Dec. 29.

Lawrence, a 6-foot-4, 350-pound junior defensive tackle, is viewed near unanimously by many scouts as a future first-round pick and is part of a Clemson defensive line that experts consider to be one of the best in college football history.

During Thursday’s media day, he was excused from talking to reporters but choose to speak and adamantly denied taking PEDs.

“I’m not the type of guy to do a selfish act like that,” Lawrence said. “I have too much pride. I love this team and my family too much to even think about putting a substance like that in my body. I don’t know where it came from or how it got here. I was raised different. If I did do it, I own up to it. I honestly don’t know where it comes from or how it got in there. Just there. Nothing I can do about it.”

Coach Swinney backed up the three players’ innocence and said the NCAA needs to create a “common sense committee” to look at drug tests case-by-case rather than issuing judgment solely based on a positive or negative result.

“I’ve been doing this a long time. And, trust me, I wouldn’t stand up here and stand up for a guy that I didn’t know without a shred of a doubt the type of person he is,” Swinney said. “These guys have not intentionally done anything. That I know. If it’s in their system, how it got in there, I have no clue of that. But we’ll have to figure that out some way, somehow it could come from anything, anything, literally.”

He added that the university will be launching an investigation to find out how the substance could have gotten into three of its players and reexamine the approved supplements used, which players strictly follow to prevent failing a drug test.

“Coach Swinney is a player’s coach,” Lawrence said. “He trusts me. He trusts all the guys. He listens to us, and he knows I’m not the type of guy to do anything like that. It just doesn’t make any sense. We’re all trying to figure it out.”

The Tigers have been preparing to play the Fighting Irish without their starting defensive tackle all week, and Lawrence has been helping the coaches prepare Albert Huggins and Nyles Pinckney to play his role on the defensive line.

“I’m just in the moment trying to help the team the best I can and be the leader I’ve been all year,” Lawrence said. “Just right now I’m doing it behind the whistle.”

The two other suspended Clemson players have played for the Tigers this season. Galloway, a back up tight end, has five catches for 52 yards and one touchdown, and Giella, a reserve offensive lineman, has played 114 snaps in 11 of 13 games during the 2018 season.

If this is the end of Lawrence’s college football career, he has accumulated 133 tackles, 19.5 tackles for a loss, and 10.5 sacks over his three years. He was likely entering the 2019 NFL Draft even before the possible suspension.

Galloway and Giella will face up to a one-year ban from the NCAA if the appeal by Clemson does not overturn the suspensions.

The No. 2 Clemson Tigers and No.3 Notre Dame Fighting Irish will play in the first of two College Football Playoff semifinal matchups at 4 p.m. on Saturday, Dec. 29.