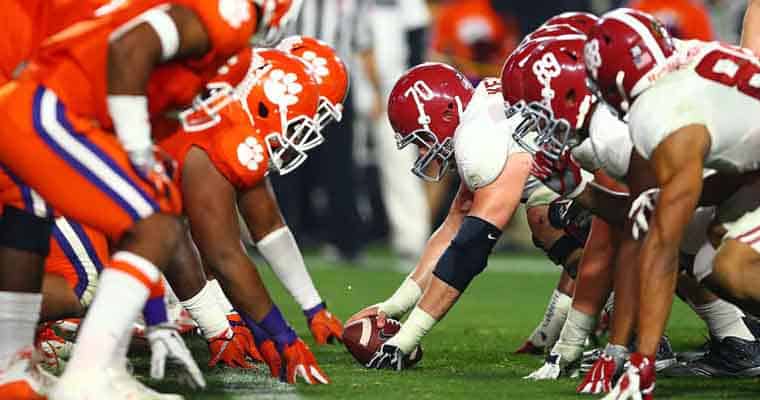 It’s the matchup we’ve waited all year for and now, it’s time to place your football bets on the final game of the college football season: Alabama-Clemson Part IV.

No. 1 Alabama Crimson Tide has opened as a 6.5-point favorite over No. 2 Clemson Tigers in the 2019 College Football Playoff National Championship.

Below is the full opening betting line for the national title game on Monday, Jan. 7 (8 p.m. ET on ESPN) at Levi’s Stadium in Santa Clara, California. The betting line is courtesy of Bovada and updated odds can be found here.

Monday’s title game will mark the fourth straight year where the two most prominent powerhouse college football programs at the moment, led by Alabama coach Nick Saban and Clemson coach Dabo Swinney respectively, will meet in the College Football Playoff. The teams have met in the CFP national title game in three of the past four seasons.

The first playoff meeting was in the 2016 CFP National Championship, which saw No. 2 Alabama win 45-40 in a shootout, but No. 1 Clemson managed to cover as a 6.5-point underdog.

The two teams met again the following year in the title game, but this time, No. 2 Clemson scored the go-ahead touchdown with one second left to give the Tigers the 35-31 victory against No. 1 Alabama in the 2017 CFP National Championship – covering as a 6.5-point underdog yet again.

And finally, last season in the Sugar Bowl CFP semifinal game, No. 4 Alabama smothered No. 1 Clemson, winning handily 24-6 and covering for the first time in the series as a 3.5-point favorite.

Now, the two teams will square off again in round 4 of the newest college football rivalry on Monday night to determine the champion of Division I FBS, and Alabama is a 6.5-point favorite in the title game again.

Saturday’s semifinal games saw Clemson suffocate Notre Dame, winning 30-3 in the Cotton Bowl, while Alabama took a 28-0 lead early in the second quarter and held on for a 45-34 win over Oklahoma in the Orange Bowl.

Alabama has won the game outright against Clemson in two of the three CFP meetings, but the Crimson Tide have a 1-2 record against the spread when facing off against the Tigers.