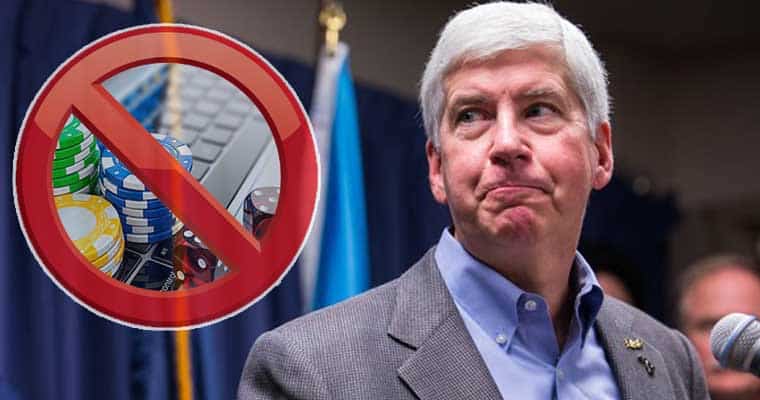 On Friday, Dec. 28, Governor Rick Snyder vetoed HB 4926 before leaving office, which would have legalized state-licensed online gambling and poker while possibly paving the way for sports betting in Michigan.

The Michigan House and Senate passed the Lawful Internet Gaming Act on Dec. 21 and only needed Gov. Snyder’s signature to become law. Most news outlets were reporting that the outgoing Republican governor was expected to sign it.

However, when Friday came, Gov. Snyder sent a letter to the state legislature, detailing why he was vetoing the legislation that would have authorized state-licensed online gambling through three Detroit casinos and the 23 tribal casinos across Michigan while creating a regulatory structure for wagering on the internet.

As for why Gov. Snyder vetoed the bill, and for disagreeing with the majority of people in both Michigan and in the United States who are in favor of gambling and sports betting, he cited the lack of data, the potential for taking funds from public schools due to the shift from land-based to online, and making online gambling easier to access for the public as primary reasons for vetoing.

“I believe this legislation merits more careful study and comparison with how other states have, or will, authorize online gaming,” Gov. Snyder said in his letter. “To be blunt, we simply don’t have the data to support this change at this time.”

“Gambling behavior could shift from the State’s iLottery program to internet-based gambling at casinos,” said Gov. Snyder. “I am also concerned that revenues may be lost as gambling behavior shifts from on-premises, to online.”

Lastly, he added: “I am concerned that the bills will encourage gambling by making it much easier to do so.”

The bill was sponsored by Republican State Representative Brandt Iden, who expressed his disappointment on Friday and said the vetoes – to not only his bill but vetoes to other bills relating to gambling on the same day – are a “ploy to monopolize money coming into the lottery” by the governor before leaving office.

“The veto pen came out for my entire gaming package, which is incredibly disappointing,” Rep. Iden said. “We had no idea this was coming. We had all the stakeholders supportive of the package and we had alleviated any concerns, so this is a very surprising outcome.”

“I think it’s unfair because you’re taking a state entity like the lottery and trying to compare it to the free-market system of other online gaming platforms,” he said. “If your problem is a concern for the lottery, you’re never going to be comfortable with an iGaming bill because it impedes on the state’s monopoly on the lottery.”

“That’s not a free-market approach,” he added.

Rep. Iden said he will reintroduce online gambling legislation and continue setup a framework for state-licensed sports betting in 2019.

“I saw over the course of the last two years the time it takes to educate people on these issues and get them up to speed on where we are,” Rep. Iden said. “I’m going to need to do that again, but I’m fully prepared to do so and confident we will have a successful 2019.

Snyder left office on Jan. 1 and Democrat Gretchen Whitmer was sworn in as the 49th governor of Michigan on the same day. Her stance on online gambling is unknown, Rep. Iden believes Michigan will have state-licensed online gambling and sports betting legalized by the end of the year.

“It took a long time to get here,” he said. “And [the vetoed bill] is a bump in the road, but I’m confident it will get done.”