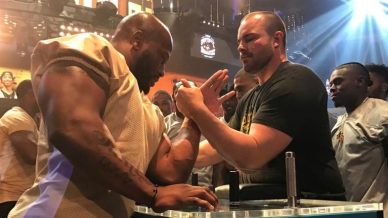 In a clear demonstration that the NFL has no intention of relaxing their restrictions concerning gambling, the league is imposing fines for several NFL players who recently participated in a sporting event that took place at the MGM Grand Hotel & Casino. The popular casino property hosted the Pro Football Arm Wrestling Championship in a made for TV event that will air on CBS sometime this spring. Close to three dozen NFL players were in attendance at the event, with several of them deciding to compete in the event.

Reports indicate that competing in the arm wrestling event was a violation of NFL policy, and those players are not subject to a penalty of monetary fines. The professional football league’s long standing policy bans players from making any type of appearance for a promotional event at a Casino. According to NFL executive vice president for communications and public affairs Joe Lockhart, none of the parties involved sought pre-approval for the event. He went on to add that had the parties sought permission, they would have been told that participation in the event is a direct violation of the league’s gambling policy and therefore would have been denied approval.

Alan Brickman, co-owner of Encinal Entertainment disputes Lockhart’s claims that pre-approval was not sought. He maintains that he was in dialogue with multiple departments within the NFL in an attempt to establish an opportunity for the NFL to partner with the event. Brickman went on to state that guidelines were established to create an atmosphere for the event that did not promote gambling or the consumption of alcohol. Every effort was made to brand the event as family friendly.

While the NFL did decline the opportunity to enter into a partnership with Encinal Entertainment, every effort was made to promote the event as a chance to get to know the players ‘behind the scenes’. It seems this did not influence the NFL to forgo the fine penalties against the players involved. It should be noted that no gambling related activities were included in the taping and the players were not promoting any type of gambling.  The event was not tied to gambling in any way.

This apparent misunderstanding has occurred on the cusp of the NFL’s decision to allow the Raiders to relocate from Oakland, California to Las Vegas, Nevada in 2020. Clearly the team’s relocation does not indicate any type of ‘warming up’ by the NFL to the concept or environment surrounding gambling entertainment. Many were expecting the NFL to request a betting ban on Raiders games, but so far no such request has been made. According to NFL commissioner Roger Goodell, the league has no plans to bring a betting ban request forward. Fans in Vegas will still have access to Raiders betting lines, as will players who choose to partake in online NFL betting.