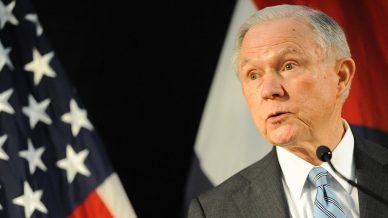 In wake of Attorney General Jeff Sessions’ comments during his confirmation hearing, the National Governors Association have expressed concern over states’ rights to have online gambling. The NGA’s Economic Development & Commerce Committee sent a letter directly to Sessions to voice their opinion on the matter.

Sessions made comments regarding the Department of Justice’s Formal Opinion on the Federal Wire Act. Specifically, Sessions said he didn’t agree with the DOJ’s opinion and would reexamine the matter. The Federal Wire Act was passed decades ago and originally banned all forms of gambling via wire transmission. As technology developed, the law was assumed to include online gambling. The DOJ deemed that the law only applied to online sports betting, freeing up other forms of online gambling. The DOJ went on to say that the decision to have online gambling should be up to individual states. The NGA believes Sessions will move to take away that right and impose some sort of federal ban on online gambling.

Virginia Governor Terry McAuliffe and Nevada Governor Brian Sandoval signed the letter and made their case for states having a say with online gambling. The letter says that states are the best option for mitigating online gambling and any sort of federal oversight would complicate things. The letter even acknowledges that while not every state may support online gambling, the decision to have it should still lie with each individual state. There are already some states that have launched online gambling initiatives, including Delaware, New Jersey and Nevada, and the NGA urges Sessions to review how they have been operating. States have employed protocols that ensure secure online gambling while adhering to age and location restrictions. For example, all state-regulated online gambling sites have age verification and use GPS to make sure those using the site are located within the state. The licenses that these online casinos have come with a strictly enforced accountability that works to maintain high-quality standards.

In the letter, the NGA warns that a federal ban on online gambling would drive people to use offshore sites. While there are legally sanctioned offshore betting sites available to US residents, none of the money from regulation would be going back to the state where an individual is betting from. State regulated online gambling sites are able to put something back towards the community in whichever way the state deems fit. The NGA’s goal is to preserve online gambling as a state-to-state issue so states can benefit from the industry in ways appropriate to them. Each state has different needs and ways of doing things and the NGA believes that should extend to online gambling.

This isn’t the first time the NGA has stepped up to voice their concerns over the federal v. state argument with online gambling. Back in 2014, the Restoration of America’s Wire Act bill threatened to take away states’ rights and the NGA wrote to Congress in hopes of dismantling the legislation. Their stance is that, historically, gambling regulation has been a state issue and should stay as such.

Sessions hasn’t made any real threats involving gambling regulation, but his actions have prompted the NGA to reach out. This will likely be an ongoing conversation and Sessions will have some major decisions to make, but the likelihood of him taking away states’ rights to have online gambling seems miniscule. The NGA’s letter certainly provides some food for thought and highlights key aspects of the debate. Only time will tell what sort of impact the letter had on Sessions.