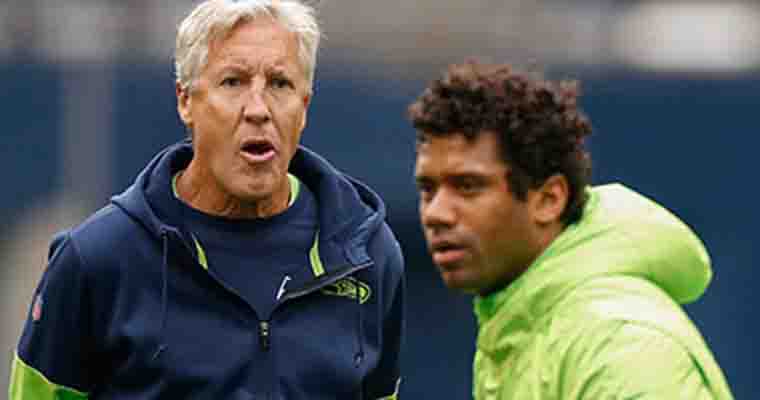 Online NFL bettors are in for a treat as there are two prime-time games on the docket tonight that are accepting action now. Both games were postponed due to COVID-19, and NFL betting sites have had to keep lines on the boards for longer than expected.

Tonight at 7:00 PM, the Seattle Seahawks will face the Los Angeles Rams at SoFi Stadium on the NFL Network.

There have been whispers of Russell Wilson trade rumors as well as calls for Seattle Seahawks head coach Pete Carroll to lose his job. While either of those outcomes may seem a little extreme for a franchise that still routinely qualifies for the NFL Playoffs, the bar has been set extremely high in Seattle.

After just one season of substandard play in Seattle, Wilson and Carroll suddenly appear old and vulnerable. While the championship coach/quarterback combination likely has earned at least one more run, this season is likely caput despite them still being alive in the playoff hunt.

The Los Angeles Rams are favored by a touchdown tonight, and Super Bowl betting sites are projecting a deep run in the playoffs where they could play spoiler to a championship hopeful or two.

LA has pretty much locked up the fifth seed in the NFC. Now the Rams just need to keep winning and hope that the Cardinals drop another game or two before the season is over for a chance at the NFC West title.

Also tonight at 7:00 PM is the Washington Football Team entering the nest of the Philadelphia Eagles and attempting to escape with their playoff hopes intact.

The Eagles are flying in hot and attempting to swoop in at the last possible moment and gain a claw hold on a wild card playoff spot before the season is over. Washington and Philly would finish outside of playoff contention if the season ended today, and the loser is likely out for good whether eliminated mathematically or not.

NFL Playoff betting sites are predicting that Washington and the Eagles both fail to make the final 7 in the NFC in 2021-22, but their current moneyline odds will payout well if taken advantage of now.

The following NFL prop bet from Bovada suggests that the Washington Football Team will struggle to make the playoffs this season.

The same can be said for the Eagles, but their odds are slightly more hopeful and also indicate a win over Washington tonight.

Although the NFC East Division has yet to be clinched by the Dallas Cowboys, it will be with another win, so it’s wild card or bust for Philadelphia and Washington.

The best part about these postponed games is that it creates for an NFL schedule that allows for Christmas Week games to occur on each day except for Wednesday and Friday. Enjoy, and may your football bets be prosperous into the new year.