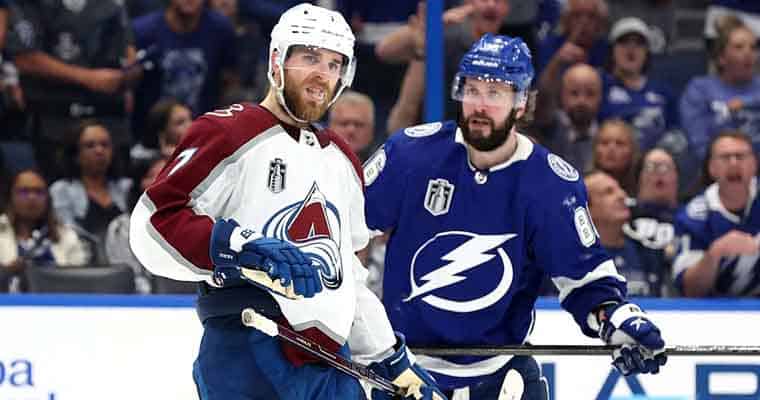 The Colorado Avalanche are just one win away from closing out the 2022 Stanley Cup Finals and besting the Tampa Bay Lightning in 5 games.

NHL betting sites are suggesting that Colorado will do just that as they are favored to beat the Lightning in Game 5 by a puck spread of -1.5.

The Avalanche have been favored in the NHL futures odds at Stanley Cup betting sites since the preseason, and they’re now three periods away from delivering payouts to gamblers who laid action early and capitalized on those advantageous moneylines.

If the Avalanche can get it done tonight, it’ll be their third Stanley Cup championship in franchise history.

The Tampa Bay Lightning are still alive, however, and are the two-time defending champions. Still, Colorado has only dropped three games this entire NHL postseason, so it doesn’t seem very likely that they’ll lose three more over as many contests.

For gamblers that would prefer to bet on series prices instead of Stanley Cup game lines, the following NHL odds have been posted at Bovada Sportsbook.

A wager of $16 on the Colorado Avalanche is required to net a one-dollar profit on the prospect of them hoisting the 2022 Stanley Cup. Online hockey sportsbooks are not willing to risk much against a Colorado win because it is such a sure thing at this point.

Still, profit is profit. NHL gamblers just need to pony up enough to make it worthwhile. The Tampa Bay Lightning’s +145 moneyline for tonight’s Game 5 may be more reasonably accomplishable and will deliver payouts that exceed the amount risked.

We won’t list them out here, but there is an NHL prop that allows for action on the first player to score a goal in Game 5 of the 2022 Stanley Cup Finals. Because picking such a random occurrence is so improbable, the payouts begin at 8x and move up from there.

Bovada Sportsbook is also willing to listen to their customers and accept the specific requests of their clientele if the wager is within reason.

Through the use of Bovada’s prop builder app, members can customize NHL wagers to their liking and the odds can later appear on the boards for others to partake in,

Raising the stakes is also easy with the prop builder application, as parlays can be easily paired together and calculated on the fly for low-dollar hedge opportunities.

Whatever your Stanley Cup betting decision may be, make it soon as tonight’s Game 5 could be the final contest of the series, leaving the pro hockey wagering boards dormant until next October.