Betting on the odds and lines to win the Stanley Cup is one of the most historic and popular wagers you can make on the NHL.

The Stanley Cup is arguably the most prestigious trophy given to a champion in all of sports, having been first awarded in 1893 and holding the record as the world’s oldest trophy to be awarded to any major professional sports team – meaning wagers on the NHL championship series date back over a century.

For betting on both the Stanley Cup Playoffs and Finals, it is our goal to provide you with the best information for legally betting on the NHL and which club will lift the most iconic sports trophy in the world at the end of the pro hockey season.

Is It Online Stanley Cup Betting Legal In 2023?

Offshore: It is legal and safe to place bets on the Stanley Cup at any of the sports betting sites we review and recommend. US law only regulates sportsbooks operating inside the country, but any sportsbooks that operate outside America are legal and can accept wagers from people living in the United States.

Domestic: The legality of Stanley Cup betting within US borders is dependent on whether the state in question has legalized sports betting. Since the PASPA overturn in 2018, many states have started licensing local sports betting operations. But even so, domestic options are severely limited, and many states do not allow online sports wagering.

If you're looking for a championship-caliber sportsbook to place your NHL Stanley Cup bets, Bovada is the best option. At Bovada, betting on the Stanley Cup is a yearly tradition, and there are thousands of Stanley Cup odds to choose from for each contest of the series. If he were still around, you can be sure Lord Stanley himself would be betting on hockey online at Bovada LV!

The highest seed plays the lowest seed at the start, and each round is a best-of-seven series with the winner needing four wins to advance to the next round.

After two rounds, the two remaining teams in both the Eastern and Western Conference play in the NHL Conference Finals, and the two winners from the third round advance to the fourth and final round.

The final round, known as the Stanley Cup Finals, is the last best-of-seven played and determines the NHL champion for the season and which team will be allowed to touch and lift Lord Stanley’s Cup.

The NHL Playoffs represent the longest postseason of any of the major US professional sports, largely due to the fact that each series is a best-of-seven and there are usually very few games contested on back-to-back nights. Further, the NHL has among the most parity of any professional sports league, and the majority of series go to six or seven games. Typically, the NHL Stanley Cup Playoffs last about two months.

The 2023 Stanley Cup Playoffs features the top 8 pro hockey franchises from each the Eastern and Western Conference being included in the 16-team bracket.

Each round will consist of best-of-seven series matchups where the first team to win four games will move on to the next round with the loser going home.

When betting on the NHL, one of the most common bets placed is who will win the Stanley Cup at the end of the season. Below are the current odds for the 2023 NHL Playoffs (via Bovada Sportsbook). These futures bets will be available all season long, and the sooner you place your wagers, the better your payout potential will be. 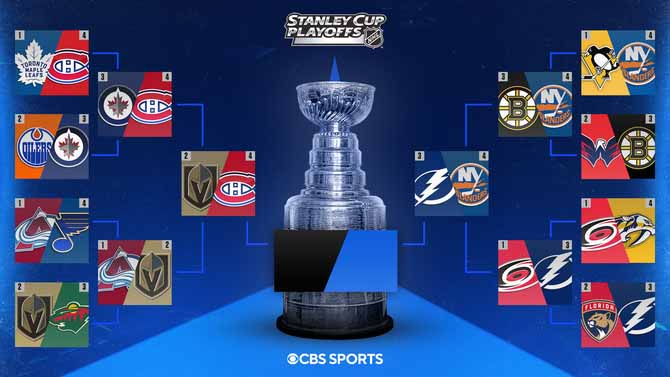 Futures are one of the most common types of bets you hear about at sports news outlets, and teams are typically given odds to win the championship – in this case, the Stanley Cup – right after the previous seasons’ finals are over.

These betting lines won’t pay out until the next season is decided, but due to wagers being placed so far in advance, payouts will be that much better due to the difficulty of predicting how well an NHL team will fare before their season (and all its injuries, suspensions, and surprises) actually starts.

Predicting the winner of the Stanley Cup several months ahead of time is one of the most challenging tasks in the entirety of online sports betting.

So how can we do that?

To properly run down the best way to place a bet on a team's odds to lift the Cup, we need to look at the recent history of Stanley Cup events and examine the teams who made it to the finals.

Here, we’re looking for how many points in the standings a team accrued during the regular season since the format was changed in 2014.

Since 2014, the winner of the Stanley Cup has never had fewer than 99 points at the end of the regular season standings, save for 2021's shortened campaign.

Combining all the winners together gives us an average of 103.5 points earned in the regular-season standings, which means the team you bet on to win it all should meet (or historically trend toward) both the minimum and average point totals.

While this shouldn’t completely determine your bet on which team will win the Stanley Cup, it should narrow down the field considerably since the winner must earn around 100 points in the regular season under the new format.

Until an NHL team wins the title with substantially fewer than 100 points, betting on a team you think will go over that amount is the safest bet – with 103.5 points being a good indicator of potential success.