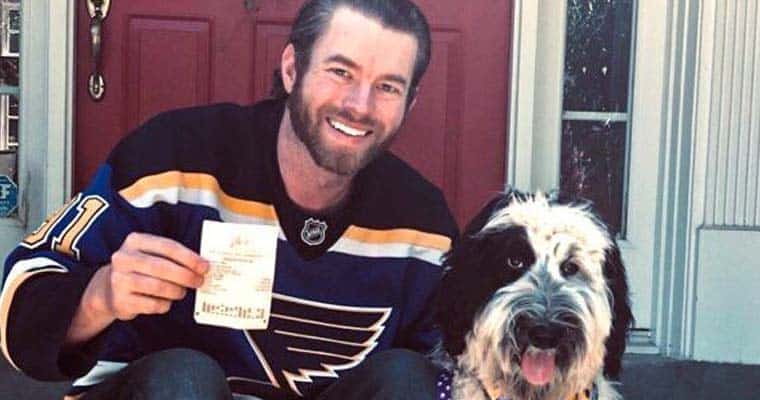 When most fans were singin’ the blues at the beginning of the year, one St. Louis native chose to bet on the Blues to win their first Stanley Cup.

And now, if the St. Louis Blues win four games against the Boston Bruins in the 2019 Stanley Cup Final, Scott Berry’s NHL futures wager will win $100,000.

The Bruins are currently listed as the favorite (-155) by a small margin over the underdog Blues (+135) for the matchup, according to Bovada.

Back in January, Berry attended a sales conference in Las Vegas, and after it was over, he chose to visit Caesars sportsbook before heading to McCarran International Airport.

Berry said he considers himself a casual bettor and likes to play blackjack and craps whenever he makes the trip for work but was unable to get away from his booth to play during this specific trip.

At the time, things were not going well for the Blues, who had a W-L-T record of 15-18-4 and only 34 points in the standings, and were tied with the Ottawa Senators at the bottom of the NHL.

However, the 250-1 odds given to Berry held the most value in Las Vegas, since he shopped around and when he found that other sportsbooks listed the Blues at 150-1, he quickly returned to Caesars and put $400 on his hometown hockey team.

“I bet with the heart on this one,” Berry said in an interview with ESPN.

“Preseason, I knew they had a good squad,” Berry said. “But I’m no pro. My brother and father are a little more risk-averse than I am. They probably thought I was an idiot.”

But it didn’t take long to see that Berry was not an idiot.

On January 23, the Blues got their record to .500 with a win, which would be the first of 11 straight that would catapult the team up the standings.

And after wins over the Winnipeg Jets, Dallas Stars, San Jose Sharks, the Blues are just one series win away from lifting Lord Stanley’s Cup for the first time in the team’s 52-year history.

Berry said he isn’t sure on whether he’ll hedge his bet, but other bettors have offered as much as $40,000 for his ticket.

“I’m not a millionaire by any means; I could obviously use the money,” he noted. “It’s one of those things where you’re stubborn and betting with your heart.”

His brother is urging Berry to hedge the bet and take the guaranteed money since he’d then have more than enough for what he really wants: to get tickets and watch the Blues in the Stanley Cup Final.

And Berry is very much aware of the uncertain nature of sports betting, referencing a bettor who didn’t hedge a bet with $300k payout if Texas Tech to win the NCAA tournament. Texas Tech lost in the national champion, and the bettor won nothing.

“I heard about that Texas Tech guy, and that was a shame,” Berry lamented. “I don’t want to be that guy. I want this to have a happy ending.”

The Blues-Bruins best-of-seven Stanley Cup matchup is set to begin on Monday, May 27, at 8 p.m. ET on NBC, so Berry will soon need to decide to hedge the bet or let it ride.

The first of the two options will win guaranteed money regardless of whether the Blues win it all or not.

The other could net more money, or have Berry singin’ the blues.