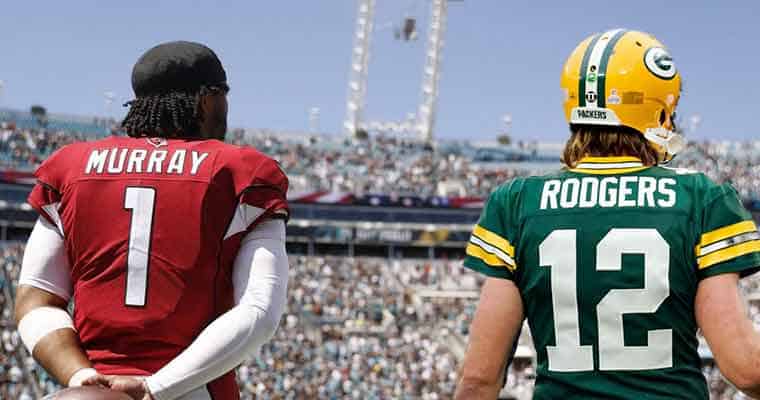 Two division-leading teams in the NFC will go head-to-head in this evening’s edition of Thursday Night Football, with the winner gaining a mid-season edge on NFL Playoff seeding.

The 6-1 Green Bay Packers have a three-game lead over the Minnesota Vikings in the NFC North, and attaining a top four playoff seed appears imminent.

The Packers can afford the loss after reeling off six straight following a Week 1 debacle against the New Orleans Saints.

The same cannot be said for the Arizona Cardinals. They are undefeated at 7-0, yet the Los Angeles Rams are 6-1 and keeping pace.

The major NFL betting sites are in alignment regarding tonight’s conclusion, but there is variation that can be explored when shopping the odds.

Betting on the Packers moneyline at BetOnline will provide the highest payout, and the -275 Cardinals odds at Bovada are the most forgiving for a simple win.

The NFL point spreads posted for tonight’s game offer a half of a point of differential ranging between 6.5 and 7.0.

MyBookie has the easiest spread for Green Bay at 7.0, whereas BetOnline and Bovada provide fertile betting ground for Arizona where they’ll only have to win by 7 instead of 8 points.

The over/under suggests a potential final score in the range of Cardinals 28, Packers 22, and while Arizona is red hot and poised for a deep postseason run, are they due for a loss?

The Packers already got the uglies out in their opener against the Saints and have been playing footloose and fancy-free since that time. Aaron Rodgers is competing at his usual Pro Bowl level which typically means that no opponent can safely assume victory.

That’s why the above betting line is so peculiar. Two teams that are on 6 and 7 game winning streaks, yet they’re a touchdown apart in the expectations.

That’s just it. Expectations. Judging what we know about Rodgers and the Packers versus where we believe Kyler Murray and the Cardinals are currently residing.

Murray is leading most NFL prop bets offered for MVP odds, and his potent combination of elusive running and accurate passing continues to keep defenses guessing.

The futures odds posted for betting on the NFL Playoffs suggest that both the Packers and the Cardinals will be making runs to qualify for Super Bowl 56.

The Super Bowl odds at Bovada imply that Arizona and Green Bay are the second and third most likely NFC teams, respectively, to win it all this year, right behind last year’s champions, the Tampa Bay Buccaneers.

Even if you aren’t a fan of the Cardinals, it’s hard not to root for them. They’ve never won a Super Bowl, and have only made it once.

2021-22 may not be the season where Murray leads the Arizona Cardinals to a Super Bowl championship, but they’ll certainly continue to peck at it for the decade or so as long as Kyler remains in Phoenix.