Skip to content
HomeNewsHorses To Watch In The 2018 Kentucky Derby 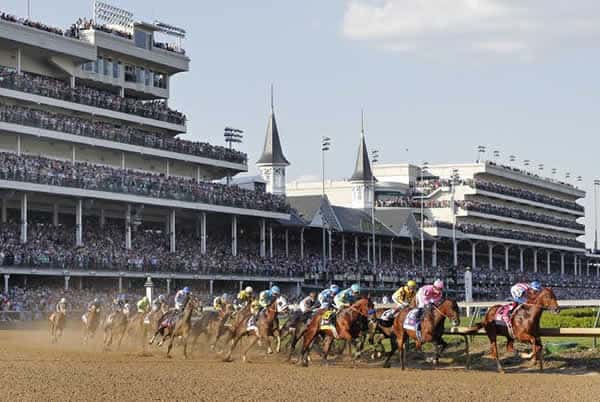 The Kentucky Derby, also known as the Run For The Roses takes place on Saturday, May 5th, 2018. Any horse that wants a chance at the Triple Crown title must first win the Derby.  Betting on the Kentucky Derby is a lucrative prospect in the sports wagering world. High-rolling bettors see huge returns on the superfecta bets, but some like to play it safe with single-race bets. Although the favorite horse is the typical winner and betting standard for some, however this year has several horses in the running to look out for.

Last year saw Always Dreaming become the fifth straight favorite to place first at the Kentucky Derby. In 2005, a 50/1 horse named Giacomo won and won superfecta bettors over $850,000 on a $1 wager. This year, Justify is the favorite, but some are wary of the horse because he is an unraced two-year-old horse. There is something known as Apollo’s Curse where no unraced two-year-old has won since 1882. That is a long drought for superstitious bettors to consider, despite Justify being the most favored horse in the race.

Mendelssohn is another horse to watch. He had an impressive running in the UAE Derby, which is a long race. However, horses coming out of the UAE Derby are 0 for 13 in the Derby. Mendelssohn is still listed at 5/1 odds in this year, meaning oddsmakers expect him to break the mold. This horse was also born in May, and only one Derby winner in the past 20 years has a May foaling date.

Magnum Moon is considered amongst the top 3 depending on which racebook you are looking at. Moon was also born in May. It may seem like a mere superstition, but you would be surprised the types of things bettors take into consideration when placing wagers. Magnum Moon and Mendelssohn are obviously favored for a reason, so perhaps the more level-headed bettor can look past the historical stereotypes.

Bolt d’Oro presents a sleeper horse in the Derby running. He’s coming out of the gate at 8/1 odds and boasts 4 wins in 6 starts. The bay colt horse comes from a successful pedigree, including a former Belmont Stakes winner. Bolt d’Oro’s Beyer Speed Figure was put at 103. This number is above the standard 95 threshold that is held by numerous Derby winners.

Bolt d’Oro also finished the last three-eighths of a mile in the Santa Anita Derby in less than 38 seconds. Speed is obviously a huge factor in the Derby, and Bolt d’Oro is a fast option. However, his pole position may limit his break out of the pack. Horses with too much speed can also burn out by the end of the race depending on how long it is.

Whether or not you bet on superstition or facts like speed or stamina is up to you. These horses are a few standout mentions in the pack. Horses with low odds can win the race, as evidenced in 2005, but if we are going off recent trends, the favored horse is the way to go. Be sure to get your wagers in before the race kicks off.