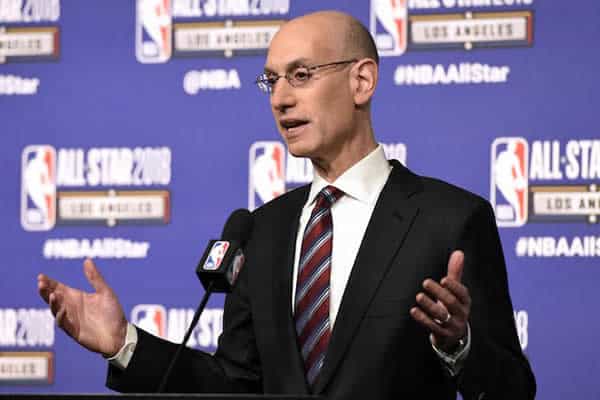 NBA Commissioner Adam Silver has a lot of aspirations for his league in the coming years. Silver must be careful though, as he may be revealing too much of the league’s hand regarding their intentions with legal sports betting. His recent comments have drawn the attention of fans and bettors alike. It is highly possible we may be seeing what the future of US based betting on the NBA will look like.  Currently legal NBA betting is typically handled through traditional betting lines at both Nevada sportsbooks and legally licensed offshore sportsbooks.

The NBA is behind sports betting legalization. They, along with the MLB, are now lobbying throughout several states in order to pitch their version of a legal framework. They may as well raise a white flag with a painted dollar sign and question mark on it. It is an obvious ploy to get their feet wet regarding betting profits, but now it seems as if it could be setting up something bigger.

In order to understand where Silver is going, you have to know where his vision started. Silver spoke at a conference in Las Vegas last year and pitched the idea of offering single-broadcast purchase options instead of expensive season-long commitments. The NBA League Pass is a television package that grants you access to every game throughout the season. It is a helpful option for NBA die-hards and fans living away from their teams (especially since some games are only broadcast on NBA TV).

Now, we are beginning to see Silver’s vision coming to life. Starting next year, fans will be able to purchase an access pass that allows them to stream as little as 5 minutes of game. This seems to fall in line with the short attention span of the modern viewer and is a cheaper option than paying for season-long access to only watch a handful of games.

This is where things get interesting. Bleacher Report, a reputable sports news company, recently launched B/R Live, a digital platform that combines aggregate scores, stats and streams all into one place. Think of it as a resource offering stats that are presented in a streamlined and fast-paced format. What is interesting is that B/R Live has exclusive rights to NBA games. Silver took it a step further to begin talking about how, ideally, they would be able to offer in-game betting on the same screen when viewing games. This platform already exists in the UK. Fans can watch soccer matches and place bets through the same broadcast interface.

If Silver’s vision comes true, it will certainly be a progressive model for televised sports betting. While progressive, Silver’s comments seem to contradict the league’s position that they have been pitching states. If there is concern over sports integrity from betting, than offering in-game betting options could present a tricky situation. The NBA’s legal team may want to save face, but Silver’s vision is clear. From a betting standpoint, this would be an interesting addition to the legal online betting spectrum. It would also help drive out the competition of offshore sportsbooks and other outlets.