Betting on the National Basketball Association shot up dramatically in, and each year after, 1979 when Magic Johnson and Larry Bird were drafted, becoming one of the greatest sports rivalries of all time and pushing the NBA to new heights and into the mainstream sports media.

We created this NBA basketball betting guide to pass on our knowledge of betting on professional basketball, and to offer our suggestions to the best online sportsbooks offering NBA lines. When picking an online sportsbook, it’s our goal to make sure you don’t get hit with a technical and aim to provide you with the most trusted sites in the betting industry, so your winning bets are nothin’ but net.

On March 11, 2020, the NBA season was suspended indefinitely due to COVID-19. The flu-like bug, which originated in China last year, has caused a massive global response, with major travel hubs closed, entire countries cordoned off, and countless public events canceled. While it seems unlikely that the NBA season itself is over, there is no indication as yet when the season will resume play, or even if the NBA Playoffs will be contested as scheduled.

In the meantime, if you still want to wager, all the top sportsbooks listed here offer betting lines on numerous other national and international sports, and they also have full casinos and racebooks. Several operators, like Bovada and BetOnline, even have robust tournament poker rooms, so you'll always have something to gamble on.

Are Online NBA Sportsbooks Legal in the United States?

Offshore: Yes. Currently, there are no federal laws in the U.S. that prohibit placing a bet on NBA games at legally licensed, offshore sports betting sites. There are a bunch out there, and the ones we recommend have been reviewed by our team of industry professionals to ensure each is both legal and safe.

Domestic: States have begun the process of legalizing sports betting across the country following the repeal of PASPA, but the legislative process has been slow and many do not allow online sports betting sites offering NBA lines to operate within the state. 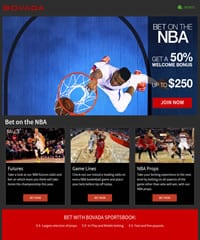 Bovada is one of the biggest and most reputable names in online sports betting. They used to be called Bodog, but opened up Bovada sportsbook to cater exclusively to their USA players.

They offer every NBA betting option a player could want also offer a mobile betting platform, live betting options, horse racing, a full online casino and poker room. With all the betting options available at Bovada, there is really no reason to bet anywhere else. They also offer some of the highest parlay payouts in the industry.

New depositing players can claim their generous 50% bonus up to $250 on their first deposit.

The NBA has 30 professional basketball teams that play in the Eastern and Western Conference.

These two conferences are split into three divisions, containing five teams each:

Every NBA team plays an 82-game regular season schedule, and the 8 teams from each conference, 16 teams in total, who finish with the best overall record qualify for the NBA Playoffs with a chance to compete in the NBA Finals.

Certain types of bets on the NBA can only be placed once a key event takes place while other bets can only be won once a particular outcome is known. To assist with these bets, here are all the biggest events and important dates for the 2018-19 NBA Season.

During an NBA season, betting lines for each individual game receive the bulk of the action, and the two most essential bets to build a bankroll are the point spread and the money line. All examples are courtesy of Bovada.

The point spread bet in the NBA is identical to the one found in other sports leagues such as the NFL, where the betting line is used to handicap a favorite and create a perceived equal bet to both sides regardless of talent level.

In professional sports, the margin of a point spread is typically much smaller due to the amount of parity within the league, and this remains true when looking at the NBA game lines.

In the example, we can see the Nuggets are the home team and the favorite to win against the Lakers. This is indicated by the negative number outside the parenthesis.

For a bet to be won on the Nuggets, the team must beat the Lakers by 5 points or more. On the flip side, for a winning Lakers bet, the team must lose by 3 or fewer points to the Nuggets or win the game by any margin.

The odds are always located within the parenthesis and indicate the amount of money needed to place a bet and the potential payout. For this example, (-110) means 110 units of money, like $110, needs to be wagered to win 100 units of money, which would be $100.

Keep in mind that NBA game betting lines do change, which is dictated by how much money comes in on one of the two sides. The sportsbook will change it in this case as the game gets closer to tipoff but won’t change it once you lock in your bet.

A money line bet on an NBA game is much simpler to understand since it is a straight bet solely on which team will win the game.

Because of this, and there being no spread involved, the odds are what is affected by the amount of action that comes in one of the two sides.

For this example, only the odds are displayed, and as mentioned above, this determines how much money must be wagered on either side and what the payout will be.

The Pelicans are the favorite at home, as indicated by the negative number, and a bet on them needs 135 units to win 100 units. For the Celtics, 100 units must be wagered and should they win, as the underdog, you’ll win 115 units.

The reason more units need to be wagered on and the payout is lower for the favorite is because they are the team more likely to win and the opposite is true for the underdog, where fewer units must be bet to win a larger amount due to the outcome being less likely to happen.

THE BEGINNING OF THE NBA

In the early 1900s, several leagues sought to give college graduates a chance to make a living off playing basketball as a profession.

There were numerous leagues popping up during this volatile time and owners of major ice hockey arenas in the Northeast would form one league, calling it the Basketball Association of America (BAA), would be founded in New York City on June 6, 1946, and eventually bring professional basketball to millions around the globe.