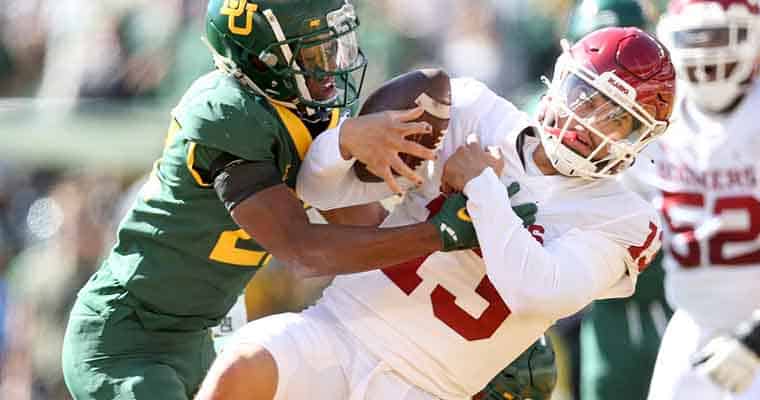 The College Football Playoffs Selection Committee dodged another bullet last weekend when the then-undefeated Oklahoma Sooners lost to their Big 12 rival Baylor Bears in what was likely their toughest remaining game of the year.

Now that the Sooners have lost a game, the CFP Selection Committee no longer faces the prospect of not including an undefeated Power 5 Conference champion for the first time since the playoffs began.

As America waits for tomorrow’s CFP rankings to come out, college football betting sites have produced odds for this postseason that allow for wagers to be placed on the team that will win it all on January 10th in Indianapolis.

The above odds for betting on the NCAAF champion features a moneyline on the University of Georgia Bulldogs that indicate not only certain inclusion in the CFP bracket, but also imply an incredibly high likelihood of winning the whole thing.

The Alabama Crimson Tide had been hovering closer to even in recent weeks, but their loss to the Texas A&M Aggies is not doing them any favors as the Jimbo Fisher lead program from the Longhorn State just dropped their third game of the season over the weekend to the Ole Miss Rebels.

The Aggies loss has secured both the Alabama Crimson Tide and the Georgia Bulldogs as the two teams that will face off on December 4th in the SEC Championship Game.

Technically, Alabama could potentially lose both of their remaining games and allow Texas A&M back into the title picture, but logic suggests there’s no way that occurs so we’re moving on and we suggest bettors provide the Crimson Tide that leeway as well.

Assuming Georgia wins this weekend against Charleston Southern and completes their undefeated regular season by taking down their in-state rival Georgia Tech Yellow Jackets on November 27th, they can go ahead and count themselves among the final four CFP teams whether or not they lose in the SEC Title Game.

That scenario would place two SEC Teams in the final four, however, if Alabama loses, they’ll have 2-losses and will almost certainly be excluded from CFP contention.

Whether there’s room for two or three non-SEC teams in the 2021 College Football Playoffs, which teams will qualify? Unless the winner of the Big Ten has 2 losses, the champion will take up a CFP bracket spot.

Another could go to the Oregon Ducks if they don’t lose another game. Their win over the presumed Big Ten Champion Ohio State Buckeyes is what is currently hoisting them so high in the rankings. If the Buckeyes lose the Big Ten to either Michigan or Michigan State, Oregon’s odds for betting on the CFP will certainly slip – but how far?

The Cincinnati Bearcats remain undefeated and are the team that is relying the most on help from others. Both Alabama and Georgia being included in the CFP will most likely cause the ouster of the Bearcats from a chance at a National Championship, but there’s still plenty of football to play between now and then.

The Sooners are the latest team to fall and clear a path for the Bearcats, so perhaps two more weeks of action will cause that avenue to widen.