Since 2014, betting on college football has been enhanced by the CFP Selection Committee placing four teams into the NCAAF playoffs for a chance to play for a National Championship. Once a team has made the CFP, all that it takes to win it all is a two-game winning streak, which is exciting to fans and bettors across the country. The added attention at sportsbooks encourages them to produce more betting opportunities each January.

Our preview of the 2020-21 NCAA College Football Playoffs will reveal how we think the season will go down and which teams will advance to the final four and play for a title. Along the way we'll provide the legalities involved, our list of top-rated sportsbooks accepting wagers on the title game, and strategies to give bettors a competitive edge when picking which team will be crowned champion of NCAA Division I FBS.

*COVID-19 Update: The only conferences that will play their football schedules beginning in the fall of 2020 will be the ACC, Pac-12, SEC, Big 12, Big Ten, AAC, C-USA, and Sun Belt. The CFP Selection Committee has announced its intentions to select four teams to play for a National Championship in Miami on January 11, 2021.

Is it legal to place an online bet for the CFP National Championship?

Yes. Placing a bet on the NCAA College Football National Championship is legal in the USA and there are two options. 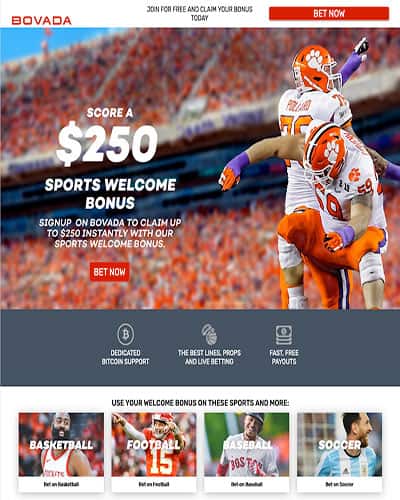 Bovada Sportsbook 50% Bonus Up To $250 For New Players

Bovada is one of the leading US friendly sportsbooks and offers betting odds for the College Football Championship.  If you are a United States resident and are looking for a legally licensed sportsbook to place your bets with, then Bovada is an excellent choice.

Below you'll find our list of legal online sportsbooks that provide a variety of national championship odds as well as NCAAF playoff and bowl game betting lines for US and international gamblers. They have each been vetted by our team of professionals, and offer bettors a safe and reliable gaming environment.

Futures odds for the eventual NCAA College Football National Champion typically debut within 24-48 hours of the previous year's title being awarded, allowing for year-round betting. Below you will find the pre-season odds for this year, as well as the current NCAAF championship odds for comparison.

The below odds are from the 2020-21 NCAAF season and are included here as a reference until Power 5 Conference Championship odds are posted for next year.

For a few moments in mid-August of 2020, it seemed as if college football was destined to be canceled for the season due to COVID-19 and its continuing spread. One by one, NCAA conferences decided to cancel fall sports, but a few dug in their heels, intent on competing.

Now that the dust is starting to settle and we have a clearer picture as to what is happening this college football season, we can offer some thoughts on how we think the playoffs seeding will look and what results we can expect.

All conferences outside of the SEC, ACC, Big 12, Pac-12, Big Ten, AAC, C-USA, and Sun Belt will not be competing in 2020, and Notre Dame, which does not belong to a conference for its football schedule, has decided to join the Atlantic Coast Conference for one season.

The current odds leaders for each Power 5 conference are the University of Alabama Crimson (SEC), Clemson Tigers (ACC), and Oklahoma Sooners (Big 12), Ohio State Buckeyes (Big Ten), and Oregon Ducks (Pac-12). We expect Clemson and Alabama to be selected to the four-team CFP bracket, but the University of Texas Longhorns will play spoiler in the Big 12 and also qualify for the NCAAF playoffs by defeating the Sooners.

That leaves one position remaining, and we believe that it will be awarded to Georgia. In 2017, when all college football teams were playing, the SEC sent two teams to the final four, so there's no reason to believe that it won't happen again with two major conferences sitting out for the year.

Those two SEC teams that made the CFP in 2017 were Alabama and the Georgia Bulldogs, and we think that'll happen again this year. Georgia is coming in hot off of an excellent 2019 effort that saw them go 12-2, with one of the losses being to the eventual national champion, the LSU Tigers.

This year, the Bulldogs look to reload and replace departing QB Jake Fromm with transfer from Wake Forest Jamie Newman. We think head coach Coach Kirby Smart has Georgia positioned to win the SEC, and have what it takes to deliver a shocking defeat to the Crimson Tide in the conference championship game. Alabama will still make the CFP as the #4 seed.

That will set up Georgia and Alabama for an instant rematch in the CFP semifinals, with Texas and Clemson facing off in the opposite game. We predict that Alabama and Clemson will advance, with Clemson eventually winning the 2020-21 NCAAF National Championship, and end Tigers' QB Trevor Lawrence's collegiate career in style.

New Year’s Day causes many to wake up later than usual following an evening of celebrating, watching the ball drop in Times Square, and taking in libations such as champagne. Sleeping in typically aligns perfectly with the January 1 CFP … Read more

The latest College Football Playoff rankings won’t be released until tonight on ESPN, but the AP Top 25 Poll and the betting odds are readily available right now. According to the AP Poll, the LSU Tigers are ranked first, followed … Read more

I think it is beginning to sound like a broken record, but we are not making this up: the Clemson Tigers fell in the rankings again but still retain the best odds to win the College Football Playoff Championship in … Read more