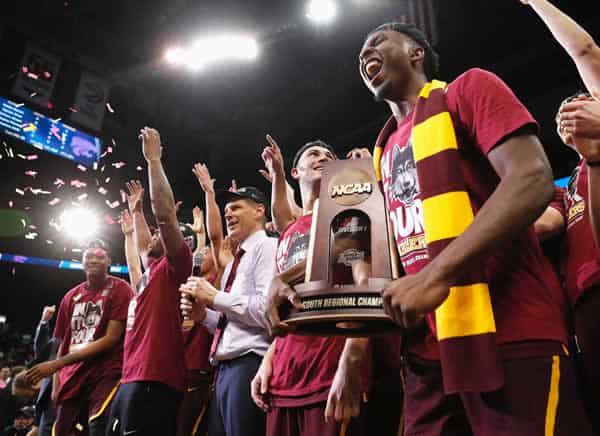 Part of the reason why college basketball, particularly the March Madness postseason, is so exciting is the fact that you never know which team is going to step up and shock the sports world. It seems that year after year, at least one low-seeded team makes a deep run into the tournament, usually knocking out a couple of heavyweights on the way. The 2018 March Madness tournament started off with a bang and kept on rolling with upset after upset. It can be a nightmare for bracket-makers and those betting on March Madness, but in all honesty, it keeps things interesting.

You cannot talk about recent March Madness upsets without discussing Loyola. The small Chicago school entered the tournament as an #11 seed. For big teams in the region, teams like Loyola provide an easy stepping stone and practice round before getting to actual competitors. However, Loyola’s squad entered the tournament with a different narrative in mind.

Their first match was against the University of Miami Hurricanes, a notable ACC team ranked #6 in their conference. The Hurricanes thought the game would be a cakewalk, but Loyola kept up with them throughout the game. As the second half winded down, both teams traded leads. The final seconds saw a 3-point buzzer beater from Loyola’s Donte Ingram. After review, less than a second was left on the clock, not enough time for Miami to come up with an answer. Loyola handed bettors their first major upsets and destroyed thousands of brackets.

The small Chicago school had a lot of hype around them at this point. Super-fan and team chaplain Sister Jean gave multiple interviews on her the squad would go on in the tournament. Not many believed the supportive and hopeful words of an old woman. Little did they know Sister Jean was right on the money.

In the second round, Loyoyla faced Tennessee, an even better team sitting at #3. Again, the game was neck-and-neck for most of regulation time. Not many teams get to win on a magnificent shot like the one Ingram produced, even fewer teams repeat the same dramatic feat. With 5 seconds left in the game, Clayton Custer sunk a midrange jumper to put the Ramblers up 63-62. It was pandemonium again.

Now, Loyola was an #11 seed headed to the Sweet 16. This was the fifth consecutive year that this happened, showcasing how one sleeper team always slips through. Loyola was set to face either Nevada or Cincinnati. Cincinnati looked to be the opponent after building a 22-point lead, but Nevada fought back and stunned them to get a win.

Nevada, a #7 seed, got out to an early 12-point lead in the first half. Thankfully Loyola’s defense stepped up and limited Nevada’s activity. The Ramblers bounced back and then some, establishing a 4-point lead over the Wolf Pack by halftime. Loyola started to gain an advantage, but the Wolf Pack fought back to make things neck-and-neck. For the third game in a row, Loyola relied on the heroics of an individual stepping up to make a primetime shot. This time, Marques Towns sank a 3-pointer with :06 seconds left in regulation to go up by 4.

Many thought the Ramblers would face Kentucky in the Elite Eight, but Kentucky was stunned by Kansas State in their Sweet 16 matchup. Now, we see 2 underdogs square off in the game of their lives. This is the farthest Loyola has made it since they won the championship in 1963. A program that no one thought would achieve this status. A team that many had losing in the first round. Players that refuse to let oddsmakers determine their fate. Loyola is on quite the Cinderella Story run and has the potential to make the Final Four and then some.

Sister Jean was considered an optimist, but now she is looked at as a fortune teller. Loyola has a tough test in Kansas State. If they win that game, they will play either Villanova, West Virginia, Texas Tech or Purdue. The Ramblers’ story is a testament to what March Madness is all about. The NCAA postseason is the time where teams shake off their regular season records and play for the opportunity to be called best in the country. Sure, Loyola hasn’t blown out any teams, but their toughness and ability to make clutch plays says more about them. They’ll look to continue that success in the Elite Eight Round.