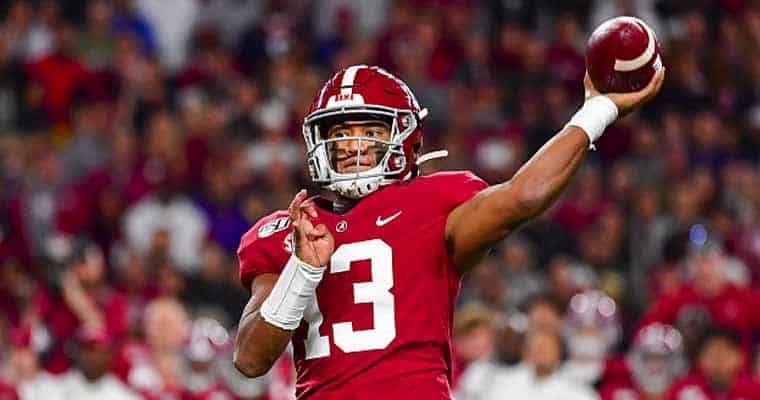 NFL Commissioner Roger Goddell is determined to hold the 2020 NFL Draft on its original date of April 23-25. A group of league general managers met earlier in the week and suggested that the draft be pushed back due to the spread of COVID-19, but the league front office is holding steady to maintain the date.

There has been no indication as to how the draft will proceed and whether players will attend, but you can bet on the NFL to put something together that will entertain its rabid fans. The event was scheduled to be held in Paradise, Nevada, to celebrate the establishment of the Las Vegas Raiders in the region.

Yesterday, the league announced the closure of all team facilities. In addition to that announcement, NFL.com is reporting that player physicals will be discontinued so that medical professionals can concentrate on coronavirus containment and treatment. These restrictions are a wise and measured move by the league, but it puts teams at a disadvantage from a player evaluation standpoint.

One such player that has an injury history that NFL teams will need to keep track of is Tua Tagovailoa. With the NFL draft just a few weeks away, teams will have to rely on captured data on potential draftees and hope that nothing has changed in the interim.

With the NFL draft approaching, top-rated offshore sportsbooks have begun releasing a variety of odds on what teams will draft certain players, and at what point in the draft. Naturally, Tagovailoa is a focus of a betting line or two.

Often heard throughout the first half of the 2019 NFL season was the phrase “tanking for Tua,” as it was frequently suggested that the Miami Dolphins were deliberately losing games so that they could attain the first pick of the 2020 draft and draft Alabama quarterback Tua Tagovailoa.

Something strange happened along the way, though, and the Dolphins started winning games and became a competitive football team by the end of the season. Around the same time that Miami started playing better, Tagovailoa suffered a devastating hip dislocation, forcing him to miss the remainder of the year.

Because of that injury and the risk associated with it, Tagovailoa is no longer predicted to be the #1 overall pick. Due to the Dolphins improved play in 2019, their record warranted them the #5 pick in the first round, and it looks like they have a shot at Tagovailoa if that is still their intent.

Tagovailoa is projected to be picked no earlier that the 3rd pick of the draft and is a heavy favorite to go to the Dolphins at number 5. The Los Angeles Chargers are interested in Tagovailoa, they pick right behind Miami, and could possibly put together a trade to leap up to the #4 pick.

The Detroit Lions pick third, and there have been whispers of dissatisfaction with franchise quarterback Matthew Stafford. Betting on the NFL draft can offer large payouts if you play it right. The odds are very low right now on the Lions selecting Tagovailoa, but betting on that occurrence could earn a nice payout of $1200 if one were to bet $100.

With the recent release of quarterback Phillip Rivers, the Los Angeles Chargers are looking for a new signal-caller, and they appear to be set to select Justin Herbert with the 6th overall pick. The odds suggest that he will be picked #6 or after and that the Chargers will choose him.

Listed just behind LA in the odds to select Herbert is Miami. Converting the American odds to intrinsic odds suggests that LA has a 45% of selecting Herbert while Miami remains a legit contender with 40%. The Dolphins control their own fate as they hold the higher pick, but the Chargers may try and leap ahead of Miami via trade and select their guy.

There is no shortage of angles that bettors can take when placing a wager on the 2020 NFL Draft. The following odds have been provided by Bovada. LSU quarterback Joe Borrows must be a sure thing to go #1 overall to the Cincinnati Bengals because odds are not even offered on him.