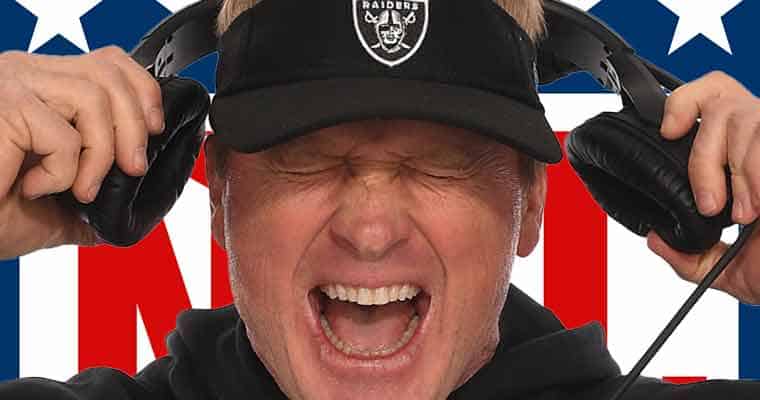 Las Vegas Raiders head coach Jon Gruden resigned on Monday after leaked emails revealed over a decades’ worth of communications loaded with language not befitting of leadership in the NFL, or anywhere else.

The emails contained harsh commentary directed toward NFL Commissioner Roger Goodell, allegedly labeling him with a homophobic slur in regard to his policies intending to decrease the number of concussions occurring in the game.

Rich Bisaccia has been promoted to interim head coach, but online NFL sportsbooks are anxious to move on and name Gruden’s ultimate successor with the following prop bet.

NFL moneyline odds on Eric Bienemy lead the way in the above Raiders coach betting line, netting gamblers a 2-to-1 payout if he gets the job in 2022-23.

Bisaccia is ranked second and is separated from the next potential head coach of the Raiders by a 125 point margin, which is the same chasm that divides him from Bienemy.

Whether Bisaccia can keep his job following the 2021-22 season will largely depend on how the Raiders perform over the next 12 games while he controls the reigns.

Las Vegas is currently tied for second place in the AFC West with a 3-2 record, but they’ll need to continue winning to keep pace with the Division and earn one of the Conference’s 7 playoff spots.

The Raiders have been hot and cold this season, reeling off wins in their first three games and then dropping the next two contents. The odds posted at Super Bowl betting sites suggest that they are the 17th most likely team to go all the way in 2021-22.

However, reality provides a different outlook. After five weeks of play, if the season ended today, Las Vegas would be the 6th overall seed in the AFC according to NFL.com.

That means there is still a lot at stake for Vegas, and how the players react over their next few games will speak volumes about Bisaccia’s ability to lead the Raiders into the future.

Las Vegas will have a chance to improve their standings and solidify second place in the AFC West this weekend as they’ll travel to face the Denver Broncos at Empower Field at Mile High on Sunday.

Denver is coming off of a devastating loss to the Pittsburgh Steelers, a game they were favored to win, so both NFL franchises should be hyped up and ready to get after it for Sunday’s 4:25 PM kickoff time.

That said, Bovada is favoring the Broncos to defend their home turf against the Raiders and relegate them to the bottom half of the division.

NFL gamblers will be hyped up for the game, as Gruden’s firing is fueling additional action on this weekend’s Raiders odds, as well as the prop bets for the next head coach in Las Vegas.