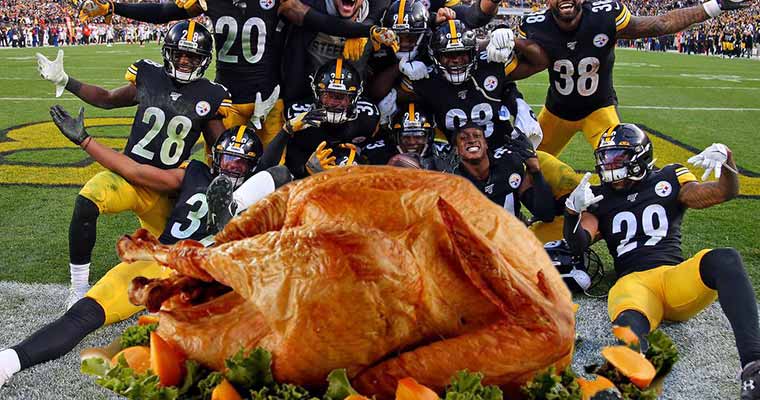 17 NFL teams have previously won their first ten games of the season. Of those 17 teams, 11 went to the Super Bowl, and 7 of them won the Lombardi Trophy.

It is clear that the Pittsburgh Steelers are entering into historic territory, as they’ve never been 10-0 as a franchise despite them being tied with the New England Patriots for the most Super Bowl titles with six each.

The NFL betting odds favor Pittsburgh in their game tomorrow night against the Baltimore Ravens, suggesting that they will win their eleventh contest and remain undefeated.

What will the Steelers’ chances of winning a championship look like if they can follow through on the predictions laid out in the Thanksgiving NFL odds, defeat the Ravens, and climb to 11-0?

7 of the 11 teams that reached the 10-0 plateau in the NFL went on to win their next game. Of those 7 teams, 5 of them advanced to the Super Bowl.

3 out of the 5 11-0 teams that made it to the Super Bowl ended up winning the championship, which would put Pittsburgh among some pretty good company and will place them in line to secure their record seventh Super Bowl Championship.

Logic would dictate that the Pittsburgh Steelers would be the favorite to become the 2021 NFL Champion, but the Super Bowl 55 odds still favor the Kansas City Chiefs to repeat as champs.

As you can see, the separation between the two teams is minimal, but still, KC being ranked ahead of PIT is a remarkable feat when researching the historic success that 10-0 teams have had over the course of the NFL’s Super Bowl Era.

There is also the new NFL Playoff format for 2020-21 to consider. An extra wild card team has been added to the playoffs in the AFC and NFC, and only one bye week is granted to the #1 seed in each conference.

That means that the #2 seed doesn’t get the first week of the NFL Playoffs off to heal up, and must host the #7 seed on Wild Card Weekend.

The new playoff format will have a huge impact on competitive play over the last couple of weeks of the NFL’s regular season, as teams will no longer have the luxury of coasting to a #2 seed and benefiting from a week to rest while waiting until the Division Round.

If NFL fans are lucky enough, KC and Pittsburgh will follow through with the promise of their regular-season success and face each other in the AFC Championship Game with everything on the line.

The potential for a marquee matchup like that leading up to Super Bowl LV is something that all NFL fans can be thankful for.