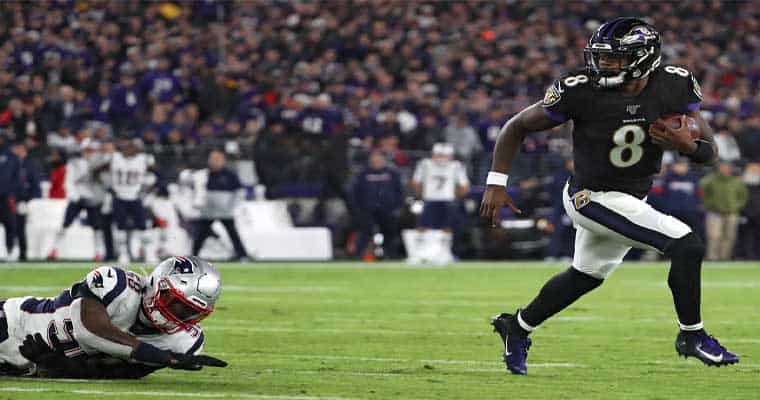 The New England Patriots’ dreams of recording another 16-0 season became a nightmare that could’ve been ripped straight out of an Edgar Allen Poe poem.

After being handed a crushing 37-20 defeat by the Baltimore Ravens this past Sunday, the Patriots appear to be mortal once more.

Ravens dual-threat quarterback Lamar Jackson chewed up the No.1 defense in the NFL, completing 17 of 23 passes for 163 yards and a touchdown, but it was his legs that made the Patriots pay all night, adding 61 yards and two touchdowns on the ground.

Despite boasting an elite rush defense, ranking in the top 5 prior to Sunday Night Football, the Patriots were gashed by the Ravens run game, which finished with 210 yards and was led by running back Mark Ingram’s 15 carries for 115 yards.

Immediately following the Patriots’ first loss of the season, bringing their overall record to 8-1, it didn’t take long for the oddsmakers at NFL betting sites to adjust their chances of lifting the Lombardi Trophy in Miami next year.

However, even though the Bill Belichick and Tom Brady’s bunch were brought down to Earth, we’re still talking about the six-time Super Bowl champion Patriots—and the oddsmakers know better than anyone how dominate the dynasty has been for two decades.

In other words: The Patriots were the favorite last week, and the Patriots still have the best betting odds to win Super Bowl 54 this week—slightly shorter, however.

There were two other notable shifts as well: