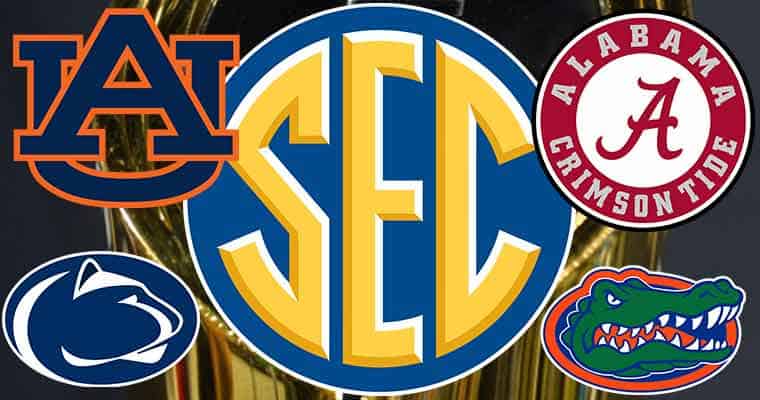 The two most intriguing NCAAF matchups this weekend feature undefeated Southeastern Conference football teams either facing each other, or top-ranked college football opponent from another Power Five Conference.

The #1 Alabama Crimson Tide will face their second top-25 opponent on the road in the course of three weeks when they travel to Gainesville’s Ben Hill Griffin Stadium to play the 11th ranked Florida Gators.

Legal college football betting sites have produced the following line on Saturday’s Florida vs. Alabama matchup, and the Crimson Tide are predicted to blow the Gators out by more than two touchdowns if the following NCAAF odds hold true.

Because the Florida Gators play in the SEC East, there is the possibility that they could lose to Alabama, but still qualify for the Southeastern Conference Championship Game where they’d likely face the Crimson Tide once again.

Of course, that would require the Gators to win the remaining games on their schedule, which includes a visit from the second-ranked Georgia Bulldogs on October 30th.

Also on the docket this Saturday is an ACC vs. Big Ten clash pairing the #22 Auburn Tigers and the #10 Penn State Nittany Lions.

Penn State is making their first entrance into the top ten in recent memory, and now they are looking to prove their worth to the CFP Selection Committee by defeating a ranked SEC school at home.

The odds for legally betting on the CFP will be impacted significantly by the outcomes of each of these two games, but a loss by Auburn will not spoil their season like it will Penn State.

The Tigers play in the SEC West and will still have an opportunity to leap Alabama and take their spot in the championship game if they can beat the Crimson Tide on November 27th in Auburn. That is, however, a very big “if.”

The same cannot be said for the Nittany Lions as a loss would place them back in line with the Ohio State Buckeyes, thus forfeiting the one-game advantage that they currently hold over them.

When browsing the NCAAF futures odds at Bovada, the current line for betting on the NCAA Football National Championship favor each team of the four teams involved in these two contests at a higher position than their current ranking in the USA Today Coaches Poll, save for Alabama who cannot be ranked any higher than number one.

Obviously, these moneyline CFP odds will change following this weekend’s college football games, but this line takes the future into account and represents what online sportsbooks believe will be the final teams in play when the 2021-22 NCAAF season is in the books.

If other conferences continue to struggle, this could be the year where 3 SEC teams qualify for the College Football Playoffs for the very first time.