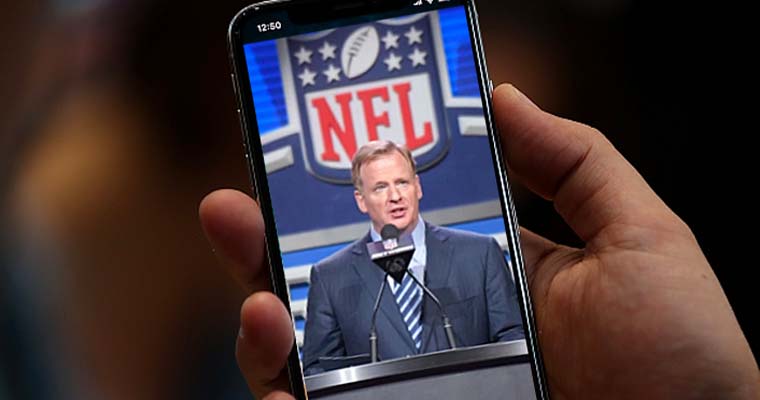 The NFL Draft begins this Thursday evening at 8 PM on ESPN, ABC, and NFL Network, and will bring with it a breath of fresh air for viewers and sports bettors alike who are starved for live action.

This weekend’s draft picks will not walk out on a stage and shake NFL Commissioner Roger Goodell’s hand. Instead, the Washington Post is reporting that a majority of the draft picks and announcers will participate remotely via live video conferencing technologies.

What that will look like exactly is anyone’s guess, but with the entire country stuck at home for the duration of the COVID-19 quarantine, many have become accustomed to home-based broadcasts on television.

Top-rated sportsbook MyBookie has unveiled a torrent of NFL betting options for this weekend’s draft, and the odds indicate some interesting developments regarding a few players predicted to come off the board in the first few picks of the opening round.

Alabama quarterback Tua Tagoavailoa has been the focus of scouts and fans of NFL draft betting alike. What’s fascinating about him is his high ceiling combined with his basement-level floor. Because the Coronavirus has kept NFL teams from attending player workouts, no one can get an accurate look at Tagoavailoa’s hip and get a gauge on how it is recovering from an injury he received during his junior year.

A few anonymous scouts have reported that Tua is entirely off the draft board for as many as three NFL teams due to concerns over his hip injury. At the same time, the odds are identical for him to be selected third by the Detroit Lions and to be selected fifth by the Miami Dolphins.

Unless the Lions make a major decision regarding incumbent starter at quarterback, Matthew Stafford, the odds appear to suggest that the Lions could trade the pick to another team who would then select Tua. If he falls beyond the sixth overall pick, then he has the potential to drop until much later in the first round. There have been whispers of the Dolphins now favoring Oregon QB Justin Herbert. We’ll all have to tune in Thursday night to see what happens.

When Will Tua Tagaovailoa Be Drafted

When Will Chase Young Be Drafted?

When Will Jalen Hurts Be Drafted

Who Will Be The 2nd QB Drafted

Who Will Be The 3rd QB Drafted

Who Will Be The 3rd Overall Pick

When Will Justin Herbert Be Drafted

When Will Isaiah Simmons Be Drafted

When Will Ceedee Lamb Be Drafted

When Will Jeff Okudah Be Drafted

The record for most first-round selections from a college in a single year is held by the University of Miami when six of their players were among the top 32 picks in the 2004 draft. Alabama and LSU feature odds that position them within striking distance of that record. Although Alabama would seem more likely to accomplish a record-tying 6 first-round selections, a different betting line suggests that LSU is the favorite to have more selected among the first 32 players.

Total Alabama Players Drafted In Round 1

Total Auburn Players Drafted In Round 1

Total Clemson Players Drafted In Round 1

Total Georgia Players Drafted In Round 1

Total LSU Players Drafted In Round 1

An NFL prop bet similar to the one below is offered for each of the NFL’s 32 teams, with the odds being the only difference. Bettors familiar with the rosters and the needs of an individual team have an extreme advantage on these betting lines, but the later the pick is in the draft, the tougher it is to determine what specific players will remain available to each team.

Total Big 10 Players Drafted In Round 1

Total Big 12 Players Drafted In Round 1

Total PAC 12 Players Drafted In Round 1

Total SEC Players Drafted In Round 1

What Position Will Be Mr. Irrelevant (Last Pick)