Betting On America's Got Talent Season 17

Ever since Simon Cowell pitched America’s Got Talent (AGT) as an alternative to his American Idol hit, fans and contestants alike have been lining up to show off their talents and to support the amazing acts performing.

AGT made its US debut on June 21st, 2006 after the show was pitched and then pulled from British Broadcaster ITV. Since its American launch, AGT has jump-started many careers for rising singers, magicians, ventriloquists, comedians, and other talented live performance acts. AGT Season 17 is now airing Tuesday nights at 8:00 PM on NBC.

Online entertainment betting is legal in the United States and many other countries. There are no laws preventing Americans from betting on their favorite AGT contestants as long as the bet is placed from a sportsbook operating legally within the industry either domestically in the United States or offshore.

American federal gambling laws do not prohibit anyone from placing bets on entertainment categories such as AGT at state-regulated or offshore sportsbooks. The state of Washington prohibits all forms of online wagering, regardless of the source.

BetOnline is one of the most reputable sportsbooks available to US bettors. They have been operating legally since 2004 and has become the go-to source for sports, entertainment, and political betting.

BetOnline offers Americans multiple banking options, including convenient cryptocurrency deposit and withdrawal methods. There is also plenty of bonus offers that new or existing accounts can add to their account for extra funds.

How To Bet On America’s Got Talent: Season 17

Betting lines for America’s Got Talent, and other competition shows will be released by various bookmakers as the season progresses. We are literally on the edge of our seats awaiting the oddsmakers to finally release the odds for who will win season 17 of America's Got Talent.

To place a bet on America's Got Talent Season 17, just follow these steps:

Betting On AGT 17 Odds To Win

The betting odds don't usually surface until after the auditions and the pool of contestants begins to narrow.  As soon as they become available - we will list them here.  It is typical to see odds for individual contestants as well as some fun entertainment prop bets emerge.

The final stages of America's Got Talent's competition is decided by America. Anyone can vote on their favorite contestant up to 10 times.  There are various options for casting your vote, including Twitter, online, and texting. You can get more information about voting for your favorite contestants on the AGT official website.

About America’s Got Talent (AGT) - Season 17

The 2022 Season 17 of America's Got Talent began on March 31 starting with their initial auditions. The gang has all returned as there are no replacement judges or hosts since last Season. 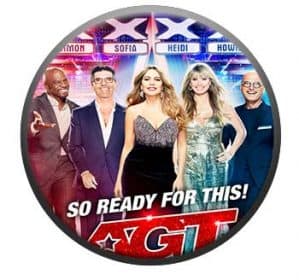 Auditions for Season 17 of America's Got Talent are already underway. You can submit your audition video on the official AGT Auditions website.

Contestants who make it past the judges are then paired against their peers as America decides who will advance in the competition. The live shows are broadcast and taped in front of a live audience. Results are then announced at the end of the show until the semi-finals.

Semi-final results give an additional episode the following night to announce the contestants that make it through to the AGT finals.

Who Won America's Got Talent Season 16?

Dustin Tavella defied all odds and won season 16 of American Idol with his amazing magic/inspirational act. His passion shines through when he is on stage, and while it might seem a surprise that he won the show, after watching his act, there is no denying he is a world-class talent that will do well in Vegas.

Past America’s Got Talent Winners

Where can I bet on America's Got Talent Season 17?Expand

Once the odds and betting lines are posted, you can bet at any of the online sportsbooks featured on this page.  They are each operating legally within the industry and have been vetted by our team to ensure they are secure, US-friendly, and offer lines and payouts comparable with the Vegas bookmakers.

Where can I vote on AGT?Expand

What time does AGT come on TV?Expand

America’s Got Talent is aired on NBC, Tuesdays at 8pm (EST).

What other competition TV shows can I bet on?Expand

Other options for this type of wagering include betting on the Emmys, The Voice, and American Idol. In addition, betting odds for Dancing with the Stars has also become very popular at legal online sportsbooks.