Wagering on the world’s biggest and most popular sport – politics! – is gaining in popularity. And best of all, you can legally wager on 2024 Presidential candidates' odds (and a lot more) at the top offshore sportsbooks.

Betting on political candidates is more fun than voting for them, and if you win, it can be far more profitable. Heck, who are we kidding? Even when you lose an online politics bet, you’re going to make more money than when the candidate of your choice takes office and raises taxes. Online political betting is truly a win-win situation!

Of course, there are a few potential candidates that could come in at the last second and disrupt things, but right now, that only seems even marginally likely on the Democrat side. Still, the best offshore sites have both GOP and DNC candidate odds, and they also offer lines for the winner of the 2024 Presidential election. Now’s the time to put your money where your ballot is!

Is Political Election Betting Legal In 2023?

It is legal to wager on political events, elections, and candidates in the US, but only if you use an offshore betting site to do so.

While sportsbooks in Nevada often advertise “Vegas election odds,” these are mere ad campaigns to get bettors into their casinos and betting lounges. NV does not allow betting on politics, nor does any other state. Indeed, the FanDuel sportsbook in WV tried to offer election odds in April 2020 and was shut down by the state in 15 minutes. There are simply no domestic election betting sites.

But since there are no laws against legally betting online with offshore sportsbooks, and since these sites offer odds on politics, you can sign up in minutes, make a deposit, and bet for your candidate of choice!

Bovada is our top choice for election betting odds, and they are the market leader in the category. While other books may sometimes offer wacky political props that Bovada won’t, Bovada’s lines are considered to be the most serious and accurate online. Even Vegas uses Bovada for their political odds advertisements, which is ironic, given that you can’t bet on politics at US-based venues. That means that Bovada should be the first place on your list when you want to “cast your vote.”

Bovada offers new Presidential election bettors a 50% welcome bonus that will match their first deposit for up to $1,000, and you can use this promotion on all the political lines they offer. And of course, Bovada also has a full casino, poker room, sportsbook, and racebook for when you get sick of thinking about politicians and all their nonsense.

While many have declared their candidacy for the 2024 Presidency, the election is expected to be a race between incumbent Joe Biden (D) and either Ron DeSantis (R) or Donald Trump (R). Of the three, only Trump has announced his 2024 POTUS campaign as of this writing. 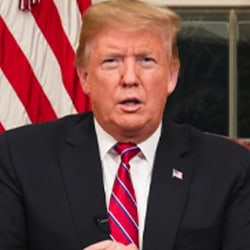 If you don’t know who Donald Trump is, you probably shouldn’t be betting on US politics. But as a refresher, Donald John Trump (born June 14, 1946, in Queens, NY) is an American businessman, real estate magnate, commercial developer, reality TV star, and the 45th President of the United States.

With a polarizing public persona, Trump has the largest contingent of die-hard support that the GOP has seen since Ronald Reagan, and The Donald scored what many consider the largest political upset in American history when he beat Hillary Clinton in the 2016 Presidential election.

Ever since then, Trump – reviled by the mainstream media and derided for every statement or decision – has shown an uncanny ability to speak directly to the people and sidestep every scandal thrown his way.

For sportsbooks, Trump – between his scandals, impeachments, and more – has been a gold mine for betting odds, and you can legally wager on just about everything Trump online. 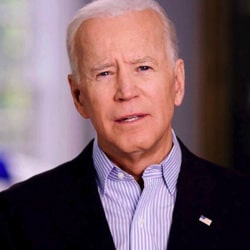 Joseph Robinette Biden, Jr., born November 20, 1942, is the former longtime US Senator from Delaware and former VP under Barack Obama. Biden, and the current President of the United States.

Biden started his 2020 campaign as a big underdog, with Bernie Sanders being the front-runner for most of the cycle. After Super Tuesday, however, Biden effectively built an insurmountable lead on Sanders, thanks to his career establishment bona fides and slew of endorsements from other erstwhile candidates.

As a first-term President, Biden is expected to run again in 2024, but many in his party are eager to see VP Kamala Harris rise to power and would like nothing more than for her to replace Joe on the DNC ticket.

With 2022 midterm election betting just months away, the Biden odds to win in 2024 are well behind Donald Trump, suggesting that Joe could be swept away in a red tidal wave that is also poised to re-establish a GOP majority in the US House and Senate. 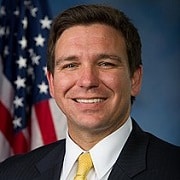 Once considered to be the most likely choice for Trump's next Vice Presidential running-mate, Florida Governor Ron DeSantis has risen up the ranks of the 2024 POTUS odds following his landslide 2024 re-election victory in the Sunshine State.

DeSantis has been thought of as the future of the Republican Party for years now, but his time was expected to come after Trump's second term. Following the less-than-stellar performance by the GOP during the 2022 midterm election cycle, Trump has now gone on the offensive against DeSantis, even donning him with the nickname of Ron "Desanctimonious."

The Florida Governor is much younger than the other two 2024 Presidential candidates by nearly 40 years, and he is viewed as much more electable than Donald Trump as of February 2023 following the Mar-a-Lago raid, January 6th hearings, and the red wave that petered out before reaching the shore in 2022.

Ron DeSantis studied at Harvard and Yale Universities and followed up his law degree by becoming a lieutenant commander in the United States Navy. He appears to have the perfect combination of characteristics to lead the GOP into a new era, but only time will tell if has what it takes to outlast "Teflon" Don and become the Republican Party's 2024 nominee.

Other Potential Candidates For President

Democrat Candidates For President In 2024

Vice President Harris was a 2020 candidate for POTUS but dropped out to give way for Joe Biden to receive the Democratic Party's nomination. Biden selected Kamala as his VP on his way to a White House victory, but Harris still remains very popular among DNC voters. Political bettors also have kept Harris in mind as she is one of the top 2024 candidates on the board.

California Governor Gavin Newsom just won his second term in 2022 and has become a popular candidate in the polls and in the election odds as a potential Democratic Party Presidential candidate for 2024. Governor Newsom has not indicated that he has any interest in running for the White House as of February 2023, but that situation could change quickly if Joe Biden declines to seek a second term as President.

Republican Candidates For President In 2024

The current Virginia Governor has been thrust into the national political scene following the 2022 midterms as the GOP and their mega-donors have been seeking out more electable candidates following the poor performance of Trump-backed candidates. Governor Youngkin has not announced any intentions to pursue the presidency in 2024, and his campaign could depend entirely on whether DeSantis decides to run.

Former Vice President and Indiana Governor Mike Pence seems like a sure bet to run for President in 2024, but his polling data and election odds do not offer him much of a chance at winning. Pence will likely make it to the debate stage for the GOP, where he could perform well and convince Republican voters to flock to his side, especially those that possess evangelical ideologies.

How To Bet On Presidential Odds Online

Where To Bet On Presidential Candidates

We invite our readers to check out each of the linked sportsbook sites within this page to see what each has to offer in the spectrum of election betting because no two gambling sites are identical in what they specialize in.

These online political betting sites feature Presidential Election odds, futures for primaries and the general cycles, and also allow for action on prop bets for any yes or no occurrence imaginable.

Online sportsbooks offer numerous prop bets for each Presidential debate, with political odds on numerous outcomes regarding the contents of their answers, the color of their attire, and just about anything else that bookmakers can come up with.

Look for Presidential debate prop bets to debut at online sportsbooks within a few days of the event's beginning. Also, be mindful that these events have been canceled in the past.