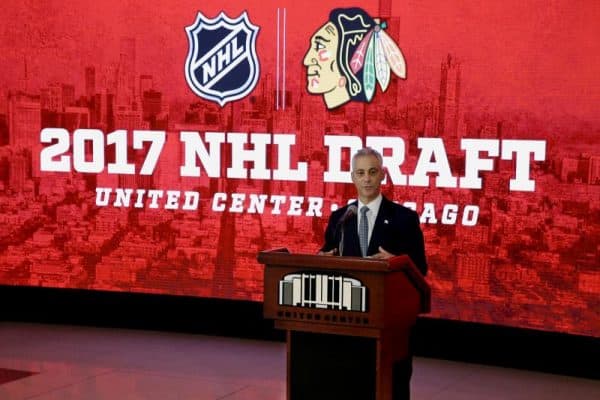 The 2017 NHL Draft is in the books. Several teams drafted players that could have a strong impact in their rookie season. The New Jersey Devils had the first pick of the night and selected Nico Hischier, a promising center. Even though their first day in the NHL is yet to come these players, the draft picks will likely affect futures bets that are already posted at some of the hockey betting sites.

Philadelphia had the second pick in the Draft and the Flyers went for Nolan Patrick, another strong center option who has shown indications of his potential despite coming off an injury. Patrick was touted as the top player in the Draft by some analysts. He scored 102 points in his 2015-2016 season with his amateur team.

The Flyers made a trade with the St. Louis Blues that gave them the 27th pick, which they used on Morgan Frost. They nabbed winger Isaac Ratcliffe in the second round. Philly’s Draft class is seen as one of the most promising and there is confidence in what this offensive trio can bring to the squad.

Offense was a focus for the Flyers, as their defensive core is in good hands for the foreseeable future, and the Flyers capitalized. Patrick can make an immediate impact with the starting rotation and Frost and Ratcliffe will make significant role players in the future.

The Golden Knights picked center Cody Glass at 6, center Nick Suzuki at 13 and defenseman Erik Brannstrom. All 3 of their selections were highly regarded heading into the Draft, though Glass will likely be the biggest contributor. The center scored 27 points in the WHL last season with the Portland Winterhawks. Brannstrom is a great defensive pickup and the Golden Knights found another defenseman Nicolas Hague in the second round.

Another team with a positive Draft result is the Colorado Avalanche. The Avalanche have been lacking in defense in recent seasons, and the Avalanche have historically drafted forwards instead of defensive players. The 2017 Draft proved a different experience for Colorado’s front office.

With the fourth overall pick, Colorado selected Cale Makar out of Canada’s AJHL league. Makar is considered an ‘offensive defenseman’, meaning he has a strong scoring capability on top of his defensive ability. The Avalanche’s defensive selections did not stop there—they selected defenseman Conor Timmins with the first pick of the second round.

The St. Louis Blues had a successful Draft night, but their success extended beyond the Draft board. The Blues shipped Jori Lehtera and his hefty contract to the Flyers along with the No. 27 pick and a conditional first-round pick for Brayden Schenn. Their trading schemes continued with Ryan Reaves and the No. 51 pick overall to the Pittsburgh Penguins for the No. 31 pick, which they used to acquire center Klim Kostin. The Blues used their No. 20 pick for Robert Thomas.

Despite the excitement of the Draft, analysts can only speculate as to how these picks will affect the teams in the upcoming season. These young players will want to make their mark in their debut seasons. The Flyers, Golden Knights, Avalanche and Blues were not the only teams with good Draft results, so the 2017-2018 season will full of surprises.