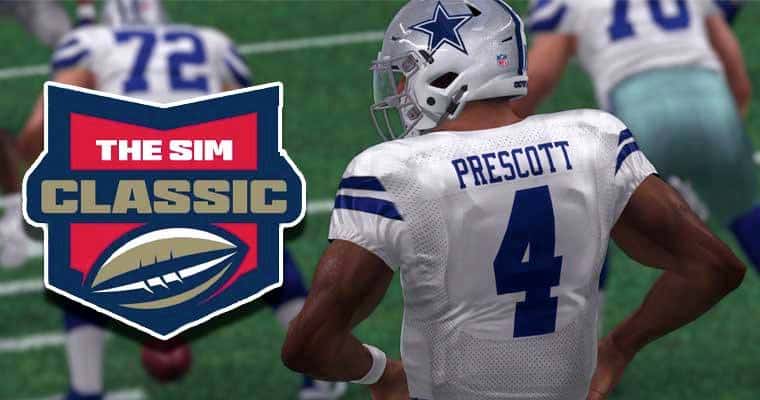 Online sports betting and casino site Bovada has organized an online tournament featuring simulated NFL games using Madden 20 as the software. They are calling it the Sim Classic, which began on May 9th with games continuing until the Sim Bowl championship game on May 24th.

We’ve got a long way to go until Sim Bowl Sunday, and that’s the idea. Bovada has designed this first-ever simulated online tournament to cover the time between now and when major sports begin again.

The PGA Tour is set to begin in early June, with Major League Baseball and the National Basketball Association showings signs of an intention to follow their lead shortly after.

That still leaves at least another four-week extension for the most prolonged professional sports betting drought since World War II.  Bovada’s Sim Classic is filling the gap with nearly a month’s worth of simulated NFL games to wager on. We’re in the middle of the competition’s dead heat, and betting lines are posted now. Here’s an example of a Sim Classic game line.

Last season’s NFL rosters are used, so that is the main factor in the decision making of Sim Classic oddsmakers. After the opening kickoff, live betting odds become available to keep the wagering action going throughout the entire simulated contest.

There’s plenty of time for live betting because the quarters are set for 15 minutes, and the games are shown live in their entirety via Twitch or hosted directly on Bovada’s site. Rookie game settings are utilized for all matchups.

Outside of the individual game lines and the live betting, odds are also available for futures, props, division winners, conference winners, as well as exactas that allow bettors to select the first and second-place teams in each division.

The Sim Bowl Champion – May 24th

As you can see, all odds are well into the positive for the eventual Sim Bowl champ, making for an incredible payday for bettors who select the right team. Even the favorite, the Baltimore Ravens, have +650 odds attached to their chances.

That means if a wager of $100 is placed on the Ravens to win it all, a payout of $650 will be earned if they do so. And that is on the favorite. A $100 wager on the Kansas City Chiefs would win $1000. These potential payouts ought to satisfy wagering urges until betting on the NFL returns in September.

During the COVID-19 shutdown, many avenues of simulated sports have made their way toward the featured sections of offshore sportsbooks.  Virtual sports have been around for a while but are picking up steam as of late as a popular betting option. These simulated contests do not involve humans either but feature generic teams that don’t attempt to replicate real-life competitors.

Sportsbooks have been hip to betting on eSports for a while now as well, but the Coronavirus pandemic and social distancing standards have also caused an uptick in attention that it receives. eSports involves human vs. human competition using popular video game franchises such as Madden 20, NBA 2K20, FIFA 20, UFC 3, NASCAR Heat 4, and more.

Stop by Bovada’s website and check out the Sim Classic section of their sportsbook for all of the betting lines available. While you’re there, go ahead and browse the virtual sports and eSports sections as well.