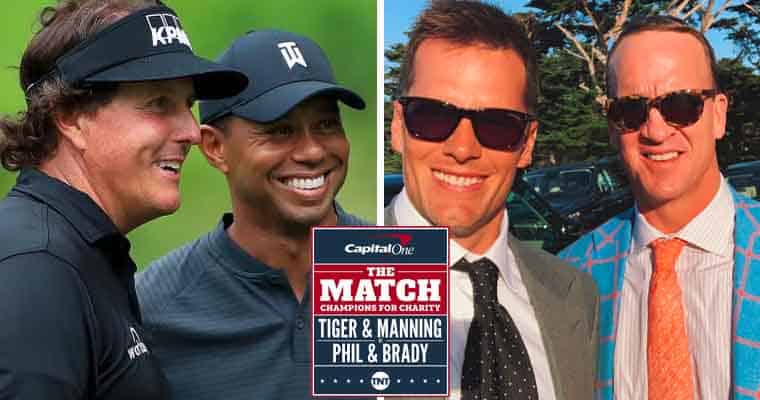 The PGA Tour’s The Match: Champions for Charity

This Sunday, the team of Phil Mickelson and Tom Brady will compete against Tiger Woods and Peyton Manning in the PGA Tour’s The Match: Champions for Charity, a televised 18-hole contest.

Proceeds from the event will be donated to charities that are geared towards helping those that have been negatively affected by the spread of COVID-19, according to ESPN.

The Coronavirus shutdown has caused for the stoppage of all major sports, which has also created an obstacle for websites that offer legal online betting. Although Sunday’s The Match is not exactly professional athletics, it has inspired a multitude of betting lines on a variety of in-match occurrences.

Pro sports such as the National Basketball Association, Major League Baseball, and the National Hockey League are currently making plans to resume their seasons, but there are still several weeks before that will happen.

Leave it to the creative oddsmakers over at BetOnline to provide entertaining options for betting on golf to fill the gap in the sports calendar. They’ve come up with standard, in-game betting lines as well as many golf prop bets to choose from. Some of the odds will call for bettors to do their homework, but others will not require any golf betting tips.

The Match: Champions for Charity Winner

Team Tiger is heavily favored to win, and that is no surprise to those that bet on the Masters in 2019, where Woods captured his 15th major title. Peyton Manning is no slouch at golf either, and he’s had plenty of time to practice during his retirement.

The following lines are available for events on hole 1. Below these you will notice that there is an even chance as to whether hole 18 will be played, so oddsmakers frontloaded the betting lines for early match occurrences.

Will Tom Brady hit the fairway in regulation on Hole No. 1?

Who will have the longest drive on Hole No. 1?

Will Peyton Manning hit the fairway in regulation on Hole No. 1?

Much like when betting on the NFL, wagering on The Match features many opportunities for proposition bets that cover just about anything that can occur during the broadcast. Below are several prime examples of these types of betting lines.

Will a Playoff be needed to decide the winner?

Will there be a Hole In One?

Our team of experts is surprised that the following betting line on Tom Brady’s hat of choice does not include odds for whether he will don a “Keep America Great” ballcap. Many may remember when Brady placed a “Make America Great Again” hat in his Patriots locker, aptly displayed so that photographers could easily discover it during interviews.

Speaking of President Donald J. Trump, he is no stranger to golf courses and owns a few himself. The Medalist Golf Club is only a forty-minute drive to Trump’s Mar-a-Lago Club, and considering his relationship with Brady, there is a possibility that he may attend. The odds suggest that he almost definitely will not make an appearance, but a massive payout can be earned if you bet on him to show up and he does.

Which logo will be on the front of Tom Brady’s hat?

What headgear will Phil wear?

Tiger only brings out the red shirt on the final day of a given tournament when he needs an extra boost. The odds suggest that he will indeed wear the red shirt, so bettors take note. Below we have also provided the remainder of the betting lines available for Sunday’s match.

The first player to have a football highlight shown

Total commercials Peyton Manning is in during the broadcast

Will “audible” be said by any player?

Will “deflate” be said by any player?

Will “Gronk” be said by any player?

Will “Omaha” be said by any player?

Will a Lombardi Trophy be seen during the broadcast?

Will any player spike a football?

Will any player spike a golf ball?