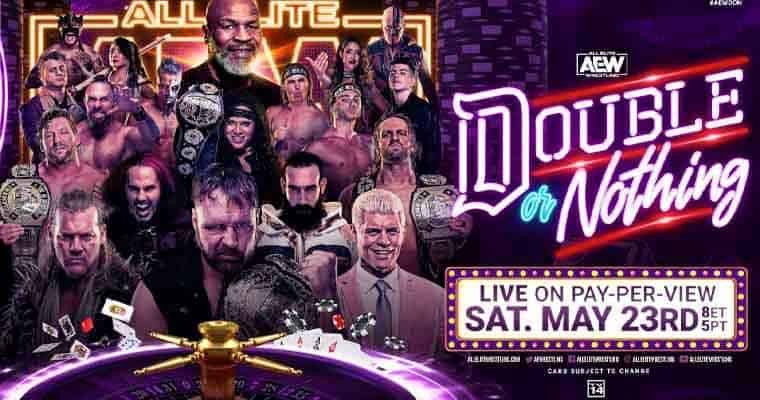 Originally scheduled to occur at the MGM Grand Garden Arena in Las Vegas, All-Elite Wrestling’s Double or Nothing pay-per-view, with its gambling theme and decor, will occur in Jacksonville, Florida tomorrow night at 8:00 PM, with the pre-show starting at 7:30 PM.

The very first Double or Nothing PPV occurred at the MGM last May and was the first event the promotion held after incorporating as an organization. Now, one year later, the upstart company, backed by the deep pockets of the Khad family, is threatening to become a legitimate rival to the number one wrestling company on the planet, World Wrestling Entertainment (WWE).

If you’ve ever bet on NFL games, chances are you’ve heard of the Khad family before. They own the Jacksonville Jaguars and are the founders and owners of AEW. Daily’s Place is part of a multi-purpose facility owned by the Khans that also includes TIAA Bank Field and an indoor practice facility for Jags.

Odds for professional wrestling offer similar outcomes and lines that gamblers will see when betting on the MMA and other fighting sports. The major difference is that wrestling is scripted, with all final results being determined well in advance of showtime.

That plants betting on pro wrestling firmly into the category of entertainment betting, alongside odds for political outcomes, reality show results, and award show winners. Despite this designation, our team has often seen wrestling in a category of its own, listed prominently amongst other major wagering options.

One such online sportsbook is BetOnline, who has provided AEW Double or Nothing odds for each match. The deadline to place a wager is 8 PM when the show begins, so don’t delay and miss out on the action.

All-Elite Wrestling’s Double Or Nothing Pay-Per-View

AEW Heavyweight Champion Jon Moxley has not had many opportunities to defend his title since capturing it from Le Champion, Chris Jericho, at Revolution in February. Limited production schedules due to COVID-19 related travel restrictions have allowed for only two matches for Moxley to prepare for Lee.

Although Moxley is heavily favored, Lee represents a complete wild-card and could surprise wrestling fans and sports betting enthusiasts alike. A wager on Mr. Brodie Lee will payout at 1.7X the amount risked if he is victorious.

Cody has his hands full with his match for the newly created TNT Championship against Lance Archer, AKA the Murderhawk. Losing pay-per-view fights is becoming a trend for Cody Rhodes, and the odds suggest that he will fall to Archer tomorrow night, in what will be the final match in a month-long tournament to determine the first TNT champ.

Per a Sports Illustrated report, Archer has declared himself “the baddest monster on the planet.” He further went on to state that, “If [Cody is] not careful, he’ll get The Blackout,” which is Archer’s devastating finisher that plants the back of an opponent’s neck and skull fiercely onto the mat after being thrown overhead from a guillotine position.

A last-minute announcement adding boxing legend Mike Tyson to Double or Nothing has fans confused as to what his involvement will be. He is advertised as awarding the title to the winner, but this is pro wrestling, so there is the potential for Tyson’s involvement in a storyline

A wager placed on the Murderhawk to defeat Cody and become the first TNT titleholder will earn a payout of $100 if gamblers risk $150 on his chances. If bettors feel that this match is when the tide will turn for Cody’s AEW career, then now is the time to wager on the American Nightmare.

Remaining AEW Double Or Nothing Odds

Inner Circle vs The Elite