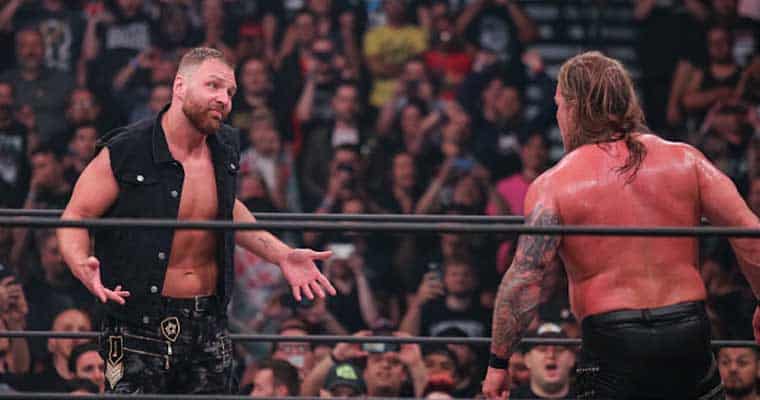 Jon Moxley is the favorite to take All Elite Wrestling’s Heavyweight Championship belt from Chris Jericho on a night where other titles are expected to change hands. Will Le Champion fall to Moxley, or will Jericho and his Inner Circle continue their reign of dominance over the realm of AEW?

All Elite Wrestling is not yet a year old, and they are picking up steam heading into their 6th pay-per-view, Revolution, on Saturday night. The upstart company began operations with Double or Nothing, a pay-per-view event last May.

AEW’s programming has been building towards Revolution for weeks now, and the odds are predicting some surprising outcomes. You read that right, betting on sports now includes professional wrestling. Although it falls under the Entertainment betting category, it is always filed under the sports tab. Let’s have a look at how Saturday night could play out.

AEW odds are provided by BetOnline.

Jericho and his Inner Circle clique look to crush Jon Moxley once and for all, showing the wrestling world who the real dominant force in wrestling is. Moxley is determined to take the title from Le Champion and get even for an eye injury that he received at the hands of the Inner Circle a few weeks back.

Moxley is a slight favorite, and if fair play were guaranteed, he’d undoubtedly destroy Jericho in embarrassing fashion. The playing field will not be level, as the Inner Circle will be gathered nearby in case anything goes wrong for Jericho.

The safe money is on Jericho. His group of cronies will not allow for Moxley to embarrass them, and they will interfere in the match at all costs. Expect a surprise double-cross as well. Jericho will retain the title and the Inner Circle will be popping a little bit of the bubbly as the credits roll.

This matchup was created out of thin air a few weeks back on Dynamite, but they’ve committed to it in the storyline, and it is working so far. Jack Hager, aka The Big Hurt, has been lingering in the background of the Inner Circle as a silent enforcer since his debut. Does he have what it takes to get the better of Dustin Rhodes?

We haven’t seen Hager in an official wrestling match since he was in the WWE, so we’re not sure what to expect. The two match up well and have comparable size and skillsets. Since it is Hager’s debut match for the promotion and they have pushed him as a heavy so far, we expect him to get the win, and the odds suggest this as well.

The Young Bucks, Matt and Nick Jackson, are the premier tag team in all of wrestling, not just in AEW. So why haven’t they won the title yet? They try to remedy that on Saturday night when they face current champions Kenny Omega and Hangman Adam Page.

Omega and Page’s title win was unexpected but still welcome. Both Omega and Page are top-end singles wrestlers, but they do not possess the longevity and teamwork that the Young Bucks do. What’s more, Page seems to be malcontented and moody at the moment and has picked up a drinking problem.

Oddsmakers expect the Young Bucks to take the title from Omega and Page, but it would be advantageous if that didn’t happen, for storyline purposes. They’ve been riding this plotline for a few weeks now, and something is about to pop. A Bucks victory might snuff out that hot angle.

Can Cody get a break? He’s beaten Wardlow in the cage, taken ten lashes, and has kept his hands off of MJF. Now the biggest baby-face in the business is an underdog to defeat MJF after completing all of the stipulations for the match.

We think Cody is good money here. He is the top wrestler in the company but has yet to experience real success of any kind. Having Cody lose to MJF now would negatively affect his character, and fans may begin to bail on him.

Cody is suggesting via Newsweek that this event could rival WWE’s annual pay-per-view, WrestleMania. As unlikely as that scenario is, if they want to have a chance at that level of success, then they had better not botch the results to this match and figure out how to use Cody before they exhaust his goodwill with fans.

Nyla Rose faces the #1 contender, Kris Statlander, to defend her AEW Women’s Championship that she just recently won from Riho. Statlander is a worthy competitor, but it is not time for her to rise to the next level just yet. Rose will win this one in dominant fashion, so head over to one of our recommended sportsbooks and bet on her before the odds change.