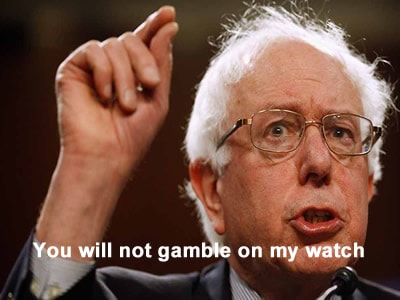 If you’re a big proponent of online gambling seeing an expansion and revival in the United States, then you’d better hope that Bernie Sanders doesn’t win the election. This is according to a number of recent Internet reports that have largely criticized the Democratic number two in the past week over his largely anti-online gambling voting history. According to his voting records, he’s not only been anti-online gambling in a passive way, but he’s been very active in rallying behind bills that either would have or already have dramatically hurt the industry in the United States.

Before the infamous UIGEA was passed, which we’ll get to in a moment, there was the Internet Gambling Prohibition and Enforcement Act, known as H.R. 4411. This bill was largely in place to do a number of things, including changing the meaning of the Interstate Wire Act of 1961 to include all forms of online gambling. And yes, you read that correctly: This guy voted to amend a law from the 1960s to affect betting on the Internet today.

Not only did Bernie Sanders vote in favor of this while he was in the House of Representatives, he was very active in supporting it. Here’s a guy who has it out for online gambling, for whatever reason; that much is completely clear with no shadow of a doubt.

Later, H.R. 4411 would not pass on its own, but instead it was stripped down slightly and added on to the SAFE Port Act, infamously becoming the UIGEA. Thankfully, the amendment to the Interstate Wire Act was removed, but Sanders supported the full-fledged UIGEA as well as its stronger counterpart, H.R. 4411, that thankfully did not pass both houses on its own.

Misleading Remarks About His Position

A lot of politicians have been in favor of banning online gambling, but not all of them have been as active about it as Bernie Sanders was in supporting H.R. 4411 and later the UIGEA. Also, not all of them have made straight-up misleading remarks about their position at town hall meetings while on the Presidential campaign trail.

When asked about the regulation of online poker in the United States, Sanders is said to have talked about how he hadn’t really thought about it that much, except to say that companies shouldn’t take advantage of the players. This last remark seems to fall in line with his “anti-corporation” image that he’s worked so hard to build up, but the fact of the matter is that he’s vehemently against online poker. Otherwise, he wouldn’t have backed the amendment to H.R. 4411 that was related to the Interstate Wire Act of 1961.

Back in the early 1960s, Congress passed the Interstate Wire Act. The point of the law is that it made it illegal for people to place bets on sports over the phone, and it was used to go after sports betting (and no other forms of betting) operations associated with organized crime. A total of 35 years later, Bernie Sanders was behind an amendment to H.R. 4411 that would have changed the Wire Act to include all forms of online gambling.

So why would you try to amend a law that was put into place three decades before the Internet was even starting to be available in most peoples homes to not only have it affect the Internet, but to ban online poker? Especially when you turn around and say that you haven’t thought about online poker at all?

It’s easy to see why Sanders is catching so much criticism about his position regarding online poker, but perhaps thankfully, it doesn’t look like he’s going to get the Democratic nomination. At the time of this writing, he trails Hillary Clinton by about 1,599 to 844 in delegates. While Clinton isn’t necessarily a knight in shining armor, she did push for a study in 2008 regarding online gambling regulation, so that’s at least better than Bernie’s support for an outright ban.

If you’re interested in the betting odds for the remaining candidates, check out our political betting section which offers updated odds and short bios on each candidate.