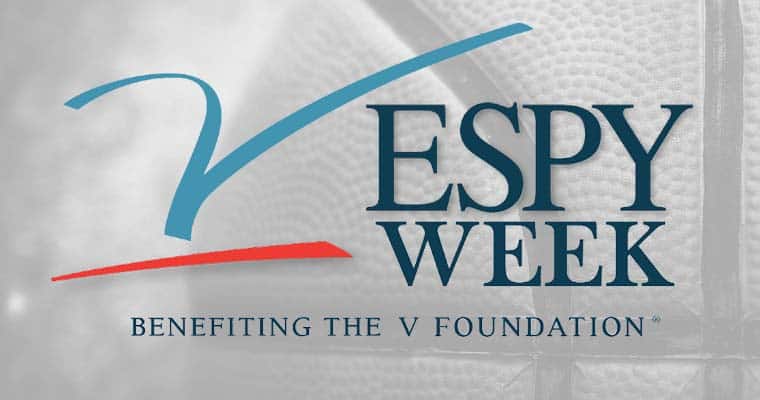 On Tuesday, ESPN began it’s 12th annual “V Week for Cancer Research,” and from Nov. 27 to Dec. 8, the sports network will drive awareness and funds to fight cancer across all its platforms to raise money for the V Foundation.

Anyone who wants to donate to the V Foundation to support cancer research can do so by visiting http://www.v.org/donate.

ESPN and the late, legendary N.C. State basketball coach Jim Valvano founded the V Foundation in 1993 and has given 100 percent of direct donations and has funded more than $225 million in cancer research grants across the country.

Last year, V Week alone raised a record $4.5 million and brought the 11-year contribution total of the drive to over $22.2 million.

“The 2018 V Week is set up to be our best yet as we impose some serious style into our fundraising efforts – celebrating the legendary panache of the 2016 V Perseverance Award winner Craig Sager and giving sports fans access to some very impressive shoes from the top stars in basketball,” said Kevin Martinez, vice president of ESPN Corporate Citizenship in a press release. “We’re excited to once again use ESPN’s reach and resources to bring ever-important funds and awareness for cancer research.”

From Nov. 26 to Dec. 6, the Kicks to Beat Cancer initiative will auction off autographed “kicks” from basketball players and coaches, along with ESPN commentators.

Anyone who wants to bid on the autographed shoes or Sager’s jackets can do so at www.ebay.com/espn.

The third initiative is the WeRateDogs “h*ck cancer” Campaign and will run from Nov. 27 to Dec.8, featuring merchandise for sports fans who love their dogs.

ESPN and WeRateDogs have partnered to drive awareness to the V Foundation’s canine comparative oncology initiative which aims at curing dogs who are currently fighting cancer.

WeRateDogs will donate 100% of the net proceeds to the V Foundation from their custom merchandise featuring the slogan “h*ck cancer.”

In addition to the three new initiatives, the ESPN NFL Countdown broadcast will highlight the NFL’s “My Cause My Cleats” program and Kansas City Chiefs wide receiver Sammy Watkins will wear the V Foundation cleats during the Week 13 matchup vs. the Oakland Raiders and will be up for auction after the game.

V Week will also feature the Jimmy V Basketball Classic, an annual event featuring some of the top college men’s and women’s college basketball teams in the country.

On Nov. 28 at 7 p.m. ET, ESPN will pause all regularly scheduled programming across nearly all of its platforms for 15 minutes to show and highlight late N.C. State coach and ESPN commentator Jim Valvano’s passionate and timeless “Don’t Give Up… Don’t Ever Give Up!” speech from the 1993 ESPYS, who lost his battle with cancer two months later.

During V Week, ESPN will also feature the “Cancer Is…” Campaign during all sports broadcasts and programming. The campaign will feature participants who define cancer in their own terms, showing vignettes and PSAs to highlight those who show strength, want to inspire hope, and share their triumph over cancer.

The V Foundation for Cancer Research was founded on the principle of declaring victory over cancer. The Foundation awards 100 percent of all direct cash donations to research and related programs and has an endowment that covers all administrative expenses thanks to generous donors.

Donations made to the V Foundation are awarded through peer-reviewed grants through a competitive process that is vetted by an official Scientific Advisory Committee. For more information on the Foundation, visit www.jimmyv.org.