Skip to content
HomeNewsMLB Pressuring For A Piece Of The Pie 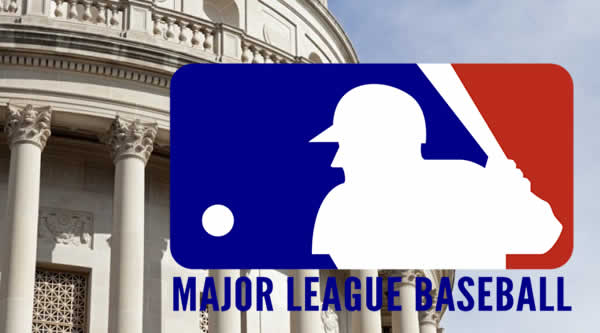 Major League Baseball has come to take its cut and many state lawmakers are resisting their advances. While the MLB has all too quickly forgotten its years of lobbying alongside the NFL, NBA, NCAA, and NHL against expanded sports gambling the tides have seemingly changed for this professional sports league. The draw of power and potential profits has leagues like the MLB and NBA “switching” sides.

The fight against legalized sports betting begun in 2014 but was initiated one year before when New Jersey passed a bill in 2013 allowing state racetracks and casinos to offer sports betting offers, like those offered in Nevada. However, professional and amateur sports leagues collectively challenged New Jersey and won in lower circuit courts. To which, New Jersey continued to appeal only to receive affirmations on the lower courts’ stance. The following year in 2014, New Jersey created another similar sports betting bill to which the leagues challenged yet again. However, this time, New Jersey appealed until it reached the Supreme Court. They announced a decision would be made by June 2018.

Currently, Nevada is the only place where full-blown sports betting and single game wagering is allowed due to being grandfathered into PASPA; Players from other states usually gamble on legal offshore online sportsbooks. Few states reserve this grandfather clause; however, Nevada is the only state to utilize it to its full potential. How much money does Nevada make in legal sports betting? In 2016, Nevada had $4.5 Billion in sports wagers and in 2017, it is estimated the handle to be reported over $5 Billion. The success gambling destinations like Las Vegas, and Nevada as a whole, has received from its sports betting offers has many states considering legal sports gambling and some are forward-thinking enough to model their sports wagering legislation similar to Nevada’s.

However, the MLB is no stranger to aggressive lobbying tactics, bluffs, and heavy campaigning; therefore, they have more experience in lobbying i.e. getting their way. While in the past, leagues like the MLB have voraciously fended off expanded forms of sports betting in efforts to maintain their pristine brand from the risks and potential threats of corruption associated with gambling, they have begun to sing a different tune in consideration of new lucrative opportunities. Usually the rhetoric is against further legalization of sports betting, however, they quickly jumped on the opportunity to get a cut of the action just in case they lost their case against New Jersey. Some experts believe they will lose, gamblers are counting on it, and cash-strapped states are hoping sports betting legalization will generate revenue. Although pro sports leagues have spent billions protecting their brands throughout their existence the display of swift and heavy presence at states considering legal sports betting clearly signifies the leagues’ concerns of losing their case against New Jersey.

The MLB and NBA have six identified states who have announced interest in legalized sports wagering in their cross-hairs. California, Pennsylvania, New York, New Jersey, Delaware, and Michigan have all received notices of these leagues coming to lobby for a specially designed sports bill that includes language favorable to the leagues. However, more and more states are popping up with their own organized sports betting bills and the leagues are playing catch-up in order to review them all and address states that do not have the leagues’ intentions in mind.

Those who question the intentions of leagues like the MLB and NBA need to only examine the language, actions, and provisions these leagues exhibit in order to gain a clearer picture. The MLB and NBA are advocating for bills with provisions that mitigate earlier mentioned risks, however, upon closer investigation of their recommendations it is easy to spot the number of self-interest preserving provisions included. These provisions allow leagues like the MLB to maintain a high level of concentrated power through enabling leagues to determine which types of wagers are acceptable and which are limited or prohibited, provide statistical data to operators, and to receive reports on betting results to determine foul play. More interestingly, the MLB has placed more weight on a single provision above them all, often threating opposition for the exclusion of said provision. This would be what is called an integrity fee, which is in simple terms a 1% handle tax. A handle is a term to mean all of the money wagered on sport, this tax or fee as they would like to call it, would be taken from the revenue generated by states and make said fee payable to each league. The leagues justify the fee as way to ensure consumer protection, monitor games, and insulate themselves against scandals.

Unfortunately, the MLB is one league that can throw its weight around in states that contain major teams in its league. Therefore, opportunities for manipulation are present and can allow leagues like the MLB to pressure states into including integrity fees in sports betting bills or risk heavy opposition. States simply want to generate revenue to further grow and enhance their states economic situation, legalizing sports wagering and taxing it is a way to do that. However, many states are noticing that leagues like the MLB and NBA show great support of bills that include their fees and heavy lobbying against those states with bills that do not include fees.

While it may seem that pro sports leagues wish to support states in building their sports betting bills, leagues like the MLB just want to line their pockets. An example of this comes from the public opposition and criticism of West Virginia’s sports betting bill, along with Iowa’s and Illinois’s recently drafted sports betting bill – simply because those bills did not include integrity fees. Without integrity fees, leagues lose out on the potential hundreds of millions of dollars that would be generated through legal sports betting via their 1% handle tax. It is easy to say that the harsh criticism against West Virginia and any state that follows them is a defensive reaction to those who refuse to play ball with the MLB and provide them with their cut.

Understandably, business is business, and everyone deserves a piece of the pie in some form or another; otherwise, what would be the point. However, to manipulate smaller states with little to no experience in sports betting into funding the leagues’ own self-interests instead of allowing states to use the full amount of revenue generated to further elevate peoples’ welfare, is not only unethical but cuts into the profitability of legalizing sports betting within a state. Smaller populated states with heavy neighboring competition are particularly at high-risk of abandoning the idea of legal sports gambling if they must pay a 1% handle as it further lowers the profitability of legalization. Besides, a 1% handle (not profit) to each league from each state is an off-the-wall amount of money which further displays the leagues’ greed. Some would say the leagues are essentially shooting themselves in the foot with this integrity fee as large states fight their fees and small states give up on legalization.