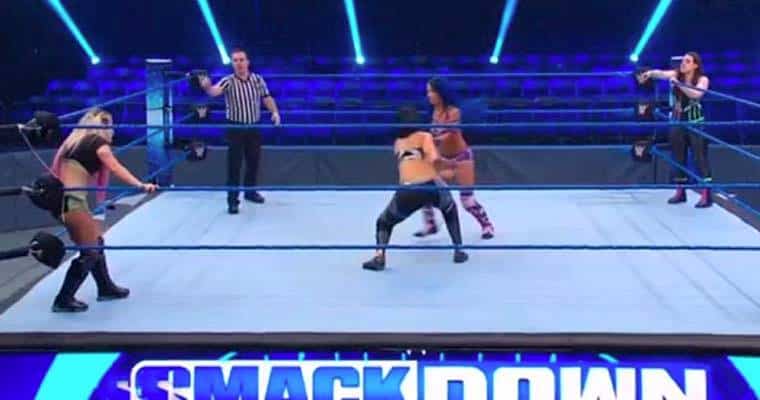 WWE’s WrestleMania is this weekend and the event is spread out over two days for the first time in history. Also a first – a wrestling pay-per-view without any fans in attendance.

WWE CEO Vince McMahon has been monitoring the spread of COVID-19 for two months now, keeping the Super Bowl of wrestling on the schedule despite every other major event of any significance being canceled or postponed.

It was speculated that McMahon and the WWE were keeping the event afloat to avoid losing millions of dollars in revenue, and that the city would need to cancel the event to trigger insurance riders. That is clearly not the case, because the pay-per-view has been forced to relocate twice since then, and the show is still continuing on.

According to the Bleacher Report, WWE executive Triple H felt that pushing forth with the event was important for the mental well-being of fans who need the release the event con provide during this especially difficult time in the world.

“I think [canceling] was obviously considered but we feel like it’s an obligation for us. Our fans have been there for us for years and years and years and we want to be there for them in this time where everybody is just doing the best to get through this, stuck home and the world needs entertainment right now.”

With the show set to air over the next two days, popular sportsbook Bovada has revealed a bevy of entertainment betting odds on many of the major matchups. What’s even better is that the betting lines aren’t just set for winners and losers, but includes several prop bets that detail events occurring within each match.

This match was originally set for a clash between champion Bill Goldberg and challenger Roman Reigns. Strongman Braun Strowman has stepped in to replace Reigns because he has leukemia that is currently in remission, and the company cannot risk exposing him to a potentially deadly virus.

This creates a particularly advantageous situation for Strowman, as Goldberg is expected to leave the company soon and drop the belt on his way out. This could provide, although through a bizarre means, the perfect opportunity for Strowman to win the title and have a significant run, a stint that many fans feel he deserves and have gotten tired of waiting on. Top sportsbooks agree and have listed favorable odds for Strowman’s success.

The Undertaker Vs AJ Styles

Number of times  The Undertaker successfully hits the “Styles Clash”

Even though the Undertaker has suffered two defeats now to Roman Reigns and Brock Lesner, he is still the most difficult man to beat at WrestleMania and sports an impressive win-loss record of 23-2. AJ Styles is sure to pair up well with the aged veteran and they should provide a match that is superior to Undertaker’s most recent efforts.

These two monster-like men will combine for a hard-hitting, high-octane matchup that will decide who will be the next WWE champion. The odds indicate that Brock Lesner will lose the title to Drew McIntyre, but that would only seem a likely outcome if Lesnar is leaving the company.

There have been no announcements made by the UFC to suggest that Lesnar is returning to the octagon to compete in MMA once again. Perhaps Brock just needs some time off for his body to heal? Either way, we love the odds on McIntyre landing a claymore kick prior to Brock’s F5, and we’re siding with betting on Brock’s +155 overall odds to retain the belt.

Participant to make most eliminations

Participant to make most eliminations H2H