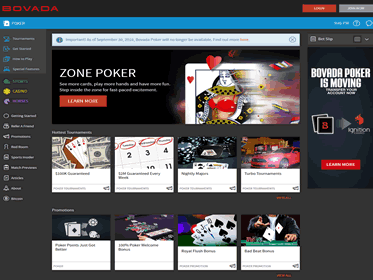 Last week, Bovada Poker announced that it will be ceasing operations at the end of next month. While some may be surprised by this, anyone following the industry news will not be. This is because a sister site, Ignition Poker, recently added an online platform that is identical to Bovada’s, which alerted industry observers that something was happening with Bovada Poker.

Following this announcement, they began recommending that their current player pool should start the migration process over to Ignition Poker. Bovada has promised that their clients will have an identical playing experience at Ignition, and since both sites are currently operating on the same platform, this is true. Players will see the same familiar interface and still enjoy features like Zone Poker and anonymous tables.

Current Bovada players will see a prompt to create an Ignition Poker account whenever they log into their Bovada Poker account from now until September 30th. The Ignition account setup is simple, but it does require separate verification before players can begin using it, so the transition will not be immediate.

To keep the migration process as streamlined as possible, Ignition is also offering earlybird incentives like a $10 cash bonus and free entry into exclusive tournaments. Players will also be able to transfer their Bovada balances into their new Ignition accounts to help minimize any inconvenience and interruption of play time.

Redeeming Bovada Points and Bonuses Before the Switch

Unfortunately, Bovada Points will not transfer into new Ignition accounts, which means players must use them or lose them before the September deadline. However, in addition to the normal casino bonuses and tournament tickets, Bovada has rolled out additional point redemption options to ensure players are able to maximize their rewards before switching.

Some players may be unhappy about having to use up their point balances so quickly, but there is good news regarding their bonuses. Players will still be able to work on clearing the Bovada Poker bonus through this transition time, and any players who do not clear the bonus before the switch will have the uncleared portion transferred over to their Ignition Poker account.

If you are still working on clearing the bonus, the best thing to do is to create your Ignition account now but wait until the September deadline before transferring your bankroll over.

What Incentives to Expect From Ignition Poker

To ease players into their new accounts, Ignition Poker is currently offering a host of incentives and bonus opportunities that will run throughout the next couple of months. The hope is that these bonuses will offset any unhappiness or unpopular changes players may face during the migration.  All of this information can be found in our Ignition poker review as well.

Right now, Ignition Poker is offering a bonus of up to $100 for the first deposit players make independently of their Bovada fund transfers. They also have an Ignition Poker bonus that functions exactly the same as the Bovada Poker bonus, so players will not lose out if they don’t make the Bovada bonus before their account expires.

Ignition’s point system also works the same way as the current Bovada point system. Points for cash games are awarded on a sliding scale, and three point per dollar are awarded for tournament entry fees and Sit & Go.

Players have 30 days after their initial deposit to clear the $100 bonus, which is released incrementally according to points accrued. The payout table is:

In addition to this bonus, players that participate in cash game tables also have the opportunity to receive a Royal Flush bonus of 50x the big blind or Bad Beat bonus of up to $1,000. To qualify for the Royal Flush bonus, players must win with the best possible hand. For the Bad Beat bonus, their Aces Full of Kings must be beaten by four of a kind.