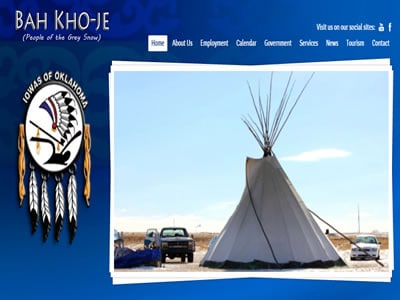 In late November of last year, the Iowa Tribe of Oklahoma was given approval to launch a real money online poker site called PokerTribe.com. In May, the site went live for play money games using Universal Entertainment Group’s software platform. In April, just a few weeks before the play money launch, the Iowa Tribe announced that they expected to launch the real money side of their site this August.

Well, August is almost over and there is no chance whatsoever that the site will be able to be launched. They had intended to provide real money online poker for both domestic and international places where online poker is regulated and legal. However, the tribe missed the mark on two pretty major points: They did not secure the appropriate gaming licenses for their site, and they also failed to finalize agreements with their chosen payment processors in a timely manner.

Iowa Tribe “Pleased With Progress Made” So Far

Despite these rather significant failures, the tribe is still optimistic about the success of their now-delayed October 1st launch date. Tribal Chairman Bobby Walkup made the following statement regarding the tribe’s progress towards their new expected launch date:

“We have completed each phase thoroughly and precisely. The final phase is the most important for a successful launch with the real money play, which is why we are rescheduling our launch date.”

This sounds like more of a vague evasion than actual optimism, though. It seems as though the tribe is attempting to put a positive spin on these setbacks in the name of “a successful launch” rather than acknowledging that they may have dropped the ball somewhere in their proposed timeline.

Walkup’s statement went on to indicate that PokerTribe’s list of “banking partners” is slated to include Discover, Visa, American Express and MasterCard, though no specifics were given regarding concrete progress made. There was also no mention of progress with any licensing authorities, which is a bit troubling given that the proposed launch is just over a month away. The statement did announce that the site’s current play money platform is being updated so that all United States poker players can access the games, which is a positive step for the tribe.

Concerns Over the Actual Viability of PokerTribe.com

Assuming that the Iowa Tribe is truly making the progress their issued statement claims, there are still serious doubts over the feasibility of a site like this. There are so many potential hoops for the site to jump through in order for them to see any kind of sustainable success.

For starters, their plan of offering real money play for US states that have legalized and regulated online poker – currently only Delaware, New Jersey and Nevada – is not taking into account the fact that each of these states requires game servers to be located in their state. This makes gaining any true foothold outside of Oklahoma nearly impossible.

Another major concern is over their plans for international expansion. Observers in the industry believe that PokerTribe’s target market is Europe and Canada, which poses its own set of problems for the tribe. It’s highly unlikely that Canadian or European players will want to take the risk of trying out a new, unknown site that only offers a basic game selection and no unique features. The site may see a brief pop immediately after its launch due to curiosity, but there is very little optimism outside the tribe regarding the site’s long-term success.

With their history of setbacks and an exceptionally bleak-looking future, PokerTribe.com is shaping up to be a lackluster endeavor that may or may not meet its rescheduled launch date.