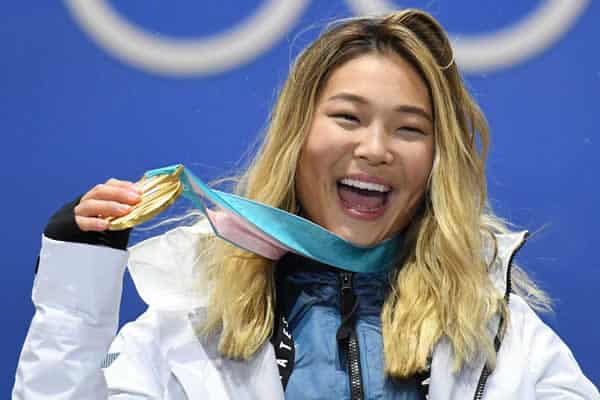 Chloe Kim recently made headlines when she took home the Gold Medal for the woman’s half-pipe event at the 2018 Winter Olympics in Pyeongchang, South Korea. Being that she is still only 17, she is now the youngest woman to ever win an Olympic snowboarding medal. She also holds 4 X Games gold medals and a youth winter Olympic game gold medal.

Chloe was born in Long Beach, California on April 23rd, 2000 and started snowboarding at 4 years old. Both her parents are originally from South Korea and she still has some extended family there. Chloe is trilingual, she speaks fluent Korean, French and English. She trained in Switzerland from age 8-10 before returning to the states to continue training at Mammoth Mountain.

Her professional career started in 2014 at the Winter X Games in Aspen, Colorado. She took home the silver medal in the half pipe event and the very next year she came back and won the gold at the age of 15. She was the youngest gold medalist in X Games history until the following year when Kelly Sildaru won gold in 2016 at the age of 14. In 2016, Kim won gold again thus making her the youngest person under 16 to win 2 gold medals at the X Games and the only person that young to win back to back gold medals.

2016 was a big year for Chloe Kim as she won gold at the X Games and proceeded to Winter Youth Olympics. At the years US snowboarding grand prix, she scored a perfect score of 100 points, only the second rider to ever do so after she landed her two 1080’s. She also scored the highest score ever in the Youth Olympic Games in 2016 after being asked to be the flag bearer for the US. Kim was also nominated for an ESPY award for break-thru athlete. Those are some amazing feats for a 16-year-old.

This year was poised to be special for Chloe Kim, she was riding high going into the 2018 Winter Olympic games as a clear favorite for Team USA’s woman’s half pipe event. On her first drop in she nailed backside 1080 among other tricks and landed a score of 93.75. After that run she was already in first place and that score would prove to be worth a gold medal. Her second run was not so favorable, she failed to land the second of a back to back 1080 combo and her score was greatly affected because of the fall. However, by the time she got to her 3rd run, she had already won the gold medal.

The closest score any had to her was Liu Jaiyu of China, who won a silver medal with her top score of 89.75. Chloe had the opportunity to just take a victory lap for her third run, but she opted to go all out. Her third run she scored a near perfect 98.25. After her amazing run, her parents and family could be seen supporting her from the sidelines. It was truly a special moment as the family celebrated together and Kim took her place on the Olympic podium. Chloe Kim gave the Americans their 3rd gold medal of the Olympic games so far.

After the event Kim stated that “The whole experience has been insane” and that “I am fortunate to go through all that and share my story with the world”. Kim is now going to be catapulted to a well-deserved celebrity status upon her arrival back into the states. At 17 she is the most accomplished woman’s snowboarders in the world and has a bright future ahead of her. She is already being compared to Shawn White who many considers the sport’s greatest of all time.

Shawn White went on to win his 3rd gold medal in the men’s half pipe event the very next day in a stunning performance that came down to his final run. The Olympics are already proving to be as entertaining as any sporting event can be. You can add a little more excitement to the season through 2018 Winter Olympics betting lines offered by legally licensed offshore betting sites.